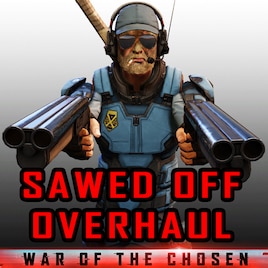 Iridar
Offline
See all 349 collections (some may be hidden)
You need DLC to use this item.

This item has been added to your Subscriptions. Some games will require you to relaunch them before the item will be downloaded.
Description
FEATURES
This mod rebalances LW2 Sawed Off Shotguns to behave more like traditional Pistols. Instead of being "one hit wonder" cheese that ruins the day of 1 or 2 strong enemies at melee range, they become more traditional sidearms for close range engagements.

For example, LW2 Rangers retain their Point Blank and Both Barrels abilities, however since Secondary Sawed Off now has infinite ammo, Pump Action perk doesn't do anything anymore, and there's no reason to ever use Point Blank over Both Barrels.

CONFIGURATION
This mod is highly configurable through configuration files located in:
..\steamapps\workshop\content\268500\1833297244\Config\
CREDITS
Sincerest gratitude to Shiremct for helping me root out a critical bug.

Huge thanks to my wonderful patrons for supporting this mod.

If you enjoy my mods, please consider supporting me on patreon[www.patreon.com] as well.
< >
43 Comments

The LDs Jul 28, 2020 @ 12:26pm
the weapon select menu will say only one sawed off per soldier while using the utility sidearms mod.

Iridar  [author] Apr 28, 2020 @ 4:01pm
@Lux Manifestus
No, but you're welcome to adjust the stats yourself in WeaponSkinReplacer.ini in the config file of this mod.
I don't like the idea of the same weapon dealing different damage based on the slot.

Lux Manifestus Apr 28, 2020 @ 3:49pm
Does the primary sawed off get the damage bonus? It would seem like a good balance for the limitation in ammo and need to reload.

Cato Mar 18, 2020 @ 6:33am
Compatibility note for Chimera Classes - not recommended. Breaks the Gunner class' core perk use of the sawn-off.

catboy general grievous Jan 25, 2020 @ 3:39pm
is it possible to use WSR to reskin the akimbo shotguns to be the tier 1 double-barrels across mag and beam tier? or would the be impossible due to this mod's existing use of WSR?
< >