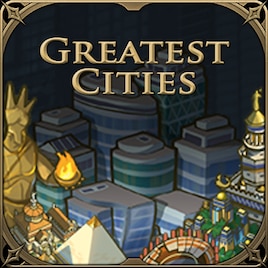 51 items
Description
The World's Greatest Cities now, and at the end of each era
Updated 2021-10-02
New: Translations
(see all changes)

Earlier Civ games had a list of the worlds top cities and world wonders, which added a nice bit of flavour, and an interesting way of seeing how you compared to the rest of the world. This mod brings this feature to Civilization 6.

Accessed from the Greatest Cities button on the reports list dropdown, you can see the Top Ten cities in the world at the current time, the ranking of all of your civ's cities, as well as all of the World Wonders that havee been constructed.

Can be safely added to (or removed from) in-progress games. But some functionality (city ownership histories and foundation dates, wonder build\destruction dates, and historical End of Era rankings) will only work properly if the mod is enabled continuously from the start of the game.

City Lists
By clicking on the column headings you can sort the lists by attributes other than the cities score. Only the cities in the list are sorted, ie: if you are using the default number of ten for the cities shown on the World list, only those ten are sorted. This is motly useful if you increase the number of cities to be shown beyond just the top ten.

Clicking on a city's name will take you to that city, if you know where it is.

There are tooltips on ranking list which give additional information:

At the end of each era a snapshot of the rankings is recorded, which can later be accessed from a dropdown on the Greatest Cities screen.

Scoring
City ranking is based on a score calculated as follows:
+25 per unique World Wonder +12 for being a Holy city +10 for having the world's highest gold, science, culture, faith or production per turn +4 per point of population +2 per district +1 per building +1 per owned plot of land +/-2 per surplus/deficit amenity -2 per pillaged improvement -4 per pillaged building -8 per pillaged district -1 per 10% of damage to walls
Rewards
Rewards for the top cities at the end of each era can be enabled by adding this mod Greatest Cities Rewards. This is optional for those that want it. If it is not present this mod will continue to function as is, with no gameplay changes.

World Wonder List
Shows all the World Wonders that have been built; when and where they where built; and whether they have been destroyed. Also shows Wonders that you can see are currently under construction with a rough, deliberately imprecise, approximation of how much progress has been made to towards their completion.

Clicking on a Wonder's image will take you it on the map - if you know where it is. As with cities this list can be sorted by clicking on the header row.

By default gives no more information than was already available by looking carefully at the map, but this can reduced further on the options screen.

Options
By default very little information that wasn't already available to the player is revealed. There are several settings controlling what is shown for both discovered and undiscovered cities that can be configured from the in game Options screen accessed from the cog icon in the top left of the Great Cities window. Your settings are saved per game, but if you want to change the defaults you can do so by editing AKGC_DefaultOptions.lua.
You can also disable the once per game notification reminding you to configure the options, and confirming whether rewards are enabled, by setting ShowOptionsReminder = false in this file.

Compatiblity
Should be compatible with any combination of DLC\Expansions, and is unlikely to conflict with most mods - but obviously I've not tested it with all 4000+ mods on the workshop.

Known Compatiblity Issues
If you use Even More Reports you need to also have Better Report Screen otherwise Greatest Cities will not be in the report list drop down.

Please read the How to report bugs\problems under Discussions first if you need to report an issue.

My Other Mods
Endgame Map Replay
Thrones and Palaces
What Did I Promise?
Greatest Cities Rewards
Popular Discussions View All (3)

Ideas for rewards for the top three(?) cities at the end of each era
Technoluddite

tran.andy193 Jul 16 @ 7:16am
Thank you so much for this mod, I enjoy it very much as a city builder type of player. However it doesn't seem to work well on my game, it always displays some random, new city that only has 1k population to be the best city. I got a notification at the start of an era saying my capital was the best city, but that didn't change the ranking.
Some cities say "NaN total", is it because of this?

DestrockQc Feb 26 @ 4:46am
Could you plz add an option for the greatest cities at the end of the game where we can see our score and the graph ? Or maybe it's there already and I was too focus on the graph lol

Technoluddite  [author] Feb 17 @ 11:47am
@Skalozubio, @H.Humpel: Thanks for the translations of this, and my other, mods! I've updated the description with links to your translations.


@CFG22, @NuDDEn: The idea of HSE integration, or otherwise adding more restrictions for multiplayer, is interesting but it would be a lot of work to restructure things to achieve that; and as I don't do multiplayer I don't think it's something I'm going to take on, sorry.

@Kurisu: I'm happy with the scoring system as is and don't intend to change it, sorry. You can easily tweak it to be more to your liking though: Just edit GreatestCities.lua, changing the '25' on line 898 to whatever value you prefer!

DudeChris33 Feb 2 @ 11:11pm
I feel like this is a bit too skewed towards wonders. I have a game where my capital is the best in every category, has 20 population, 4 wonders, and is a holy city but my friends size 11 city with 6 wonders is beating me. (Not by much but the fact that that city is even close bugs me)

NuDDen Jan 30 @ 11:40am
Epic Mod! I have one question about MP though: One option allows to see wonders that are being built in cities/nations that have not yet been explored. You can take advantage of this in multiplayer. Is it possible to remove this option?
Cheers