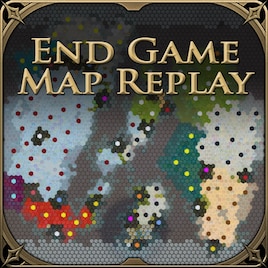 51 items
Description
Relive the rise, or maybe the fall, of your civilization and see how the rest of the world evolved over the course of the game.
Updated 2021-11-27
New: Bugfixes for Hotseat games

End Game Replay
A new tab, 'The World', is added to the End Game screen. When selected this displays a map of the of the world, initally showing it as it was at the begining of the game. History can then be replayed showing cities being founded, infrastructure being built, territory gained and lost, and religions spreading over the course of time.
There are playback controls at the bottom of the screen to control the replay speed, skip forward and back through time, etc.

In-game Map
The map history is also available during a game, as well as at the end. It can be accessed from the Map History button on the Launch Bar (top left of the screen), and will show the known world as it exists at the time. All the same playback controls are available as for the End Game screen.
The In Game map does not reveal any information that the player didn't already have access to. It will only show territory that you have actually explored, and will not show resources that you have not learned about.
There are two modes for this screen, a window view and a fullscreen view. By default, it will open in fullscreen mode and you can switch between this and window mode using the expand\collapse button to the left of the close button.

Options
There are a number of configurable options for what is shown on the map: Land ownership or religion overlays; cities, infrastructure, resources and features on each tile; which events should generate a 'ping', and whether to play a sound for each ping. These can be accessed by clicking the leftmost button in the playback controls (the one with the gear icon).

Default settings for most of the options can be changed by editing AKMH_DefaultOptions.lua in the mod directory. You can also completely disable the In Game map, or change whether it defaults to window or fullscreen by setting the relevant option in this file.

Performance
Has been tested with huge, sixteen player, maps on marathon speed out to around turn 1700, as a worst case scenario: Impact on the game performance is minimal, adding may be second in between turns in the late game, and one or two seconds to the time to load a save game from around turn 1000. On a standard map at standard game speed there is almost no impact.
Map display and playback performance remains acceptable even in this worst case scenario. Maximum playback speed is, however, effected by the size of the map and the amount it is changing from one turn to the next: Speed 10 on a huge map around turn 1000 will be slower than speed 10 on a small map around turn 100. Reverse playback is also slower than forward playback.

Compatibility
This mod needs to be active to track changes to the state of the world, so it is best enabled from the start of a new game, although it can be added to, or removed from, in progress games at any time. Although it does add data to savegames it is not marked as AffectSavegame as it does not make any gameplay changes.

Should work with any combination of Expansions\DLC, but has only been tested with all DLC enabled.
Should play nicely with mods that add new districts or wonders, as long as they have icons that are similiar in style and size to those of the vanilla game.
Will probably conflict with other mods that change the End Game screen, if there are any of those!?

Has only been tested with singleplayer games, but it should work for hotseat and multiplayer games as well.

Squishy May 28 @ 4:09pm
should be in the base game. was the best part about winning in the older civ's

thank you for adding this!

Technoluddite  [author] Feb 17 @ 11:36am
Could anyone having issues with the replay failing to capture the whole game please read the Bug Reports and Troubleshooting discussion thread and most the details in there?
I've not been able to reproduce the problem, and without more info there is nothing I can do even investigate, let alone fix it.

yandrey Feb 3 @ 10:37am
Thank you, I was hoping for this feature since the release! It's a shame Firaxis didn't do it...

biblybobbly Jan 22 @ 2:17pm
I play on Epic Speed, and the maps are always incomplete (dont go the full duration of the game). Any way to fix that?
< >