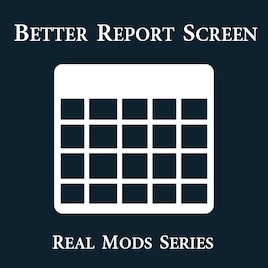 This item has been added to your Subscriptions. Some games will require you to relaunch them before the item will be downloaded.
In 1 collection by infixo
Infixo's UI Mods

12 items
Description
New version 6.1.2 as of 19.05 - support for Monopolies and Corporations Mode!

Important information
1. Sorting in Policies tab will not be implemented.
2. Please be aware that information displayed in Yields tab may be different from information shown in other places in the game. This is just how original Firaxis code works, the mod doesn't change that. I have added some missing information from common modifiers, but there are simply too many of them to implement all. However, I would appreciate posts about such discrepancies and ideas on how to improve the reports even more.
3. Stacking policies. Policies are calculated based on actual, current yields. Because some modifiers may affect the same objects, it might happen that some yields could be calculated twice. I have NOT yet came across such case, but there are hundreds of modifiers, and many are created in custom mods. Obviously not all of them are supported by the mod. As for now all required for vanilla and R&F policies are supported, plus several others related.
3a. Yields for policies that are actually activated may suffer from this effect.
4. Unknown effects. The exclamation sign appears when there is an effect not implemented in the mod. This usually is a non-yield affecting one, like speed wonders, get extra xp, etc. You can ignore it basically, it helps me tracking which effects needs to be implemented. It should appear ONLY for policies NOT affecting per-turn-yields. If you find a policy that is NOT processing correctly a modifier that DOES affect yields - let me know and I will implement support for this modifier. Also, you don't need to check them again and again because they are the same all the time, each game, in every turn. They are related to the game internal configuration, not your current situation in the game.
5. The tooltip for a policy impact yields shows some technical information. It is intended for debugging and testing purposes, not aesthetics (be aware that it will not be localized). However, if you are interested how the game engine works, you might find some useful info there :)
6. Extended promotions info in Units. Information here comes directly from game's engine and is based on actual attached modifiers. It is a bit technical, I try to present it in an understandable form using icons and existing texts. Please do not report effects listed multiple times (especially from Great People) - this how they are internally handled, Great Generals listed as Great Admirals - because they share the same modifiers and unified combat strengh for all types of "strength" (ranged, defense, etc.) - the game uses one type of modifier for all such effects. But... please report any effects that will appear in grey - these are the ones that need still to be implemented.
7. Follower Beliefs. Calculations for these beliefs assume that all cities are following a religion that actually has the specific belief. In real game, if not all cities are following this religion, the final effect will be ofc smaller. This is more of a "what-would-be" scenario.
7a. There is no Founder nor Enhancer beliefs. Only Pantheons and Followers.
8. The impact from city-state influence is shown as "what-would-be" with a single one, plus in brackets the actual impact as in current game situation (basically the former multiplied by the number of influenced CSs).

pauloel7 May 29 @ 7:46pm
I'd wish its total matched what you in the base game gold summary.

pauloel7 May 29 @ 3:00pm
There are deals missing in the report for me, under yield tab. Anyone else has that issue?

Vacloud Apr 17 @ 11:03am
Does this mod take away the war weariness numbers? I cant find them anymore.

RedRider Feb 18 @ 2:29pm
Is there a legend to explain what each of the symbols on the report screen mean?
< >