396 ratings
What Did I Promise?
Description Discussions2 Comments54 Change Notes 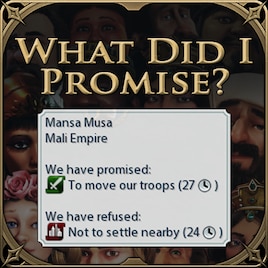 51 items
Description
Never accidentally break a promise again
Shows information about promises you have made, or have refused to make.

Deliberately breaking promises you have made to the AI players is all part of the fun of being an immortal dictator bent on world domination. Accidentally breaking promises you made days or weeks ago, because there's no way to see what you've promised to whom, or when those promises expire, is just annoying. Now you can now easily see what commitments you have made, and for how long they last. See screenshots, and below, for details.

Can be safely added to, or removed from, in progress games; but will not show promises that were initiated before mod was active, so is best enabled from the start of a game.

Leaderhead Tooltips
Leaderhead tooltips show the active promises with each opposing leader, including whether you made, or refused to make, the promise. If you're using Extended Diplomacy Ribbon or Better Leaderhead Icons, the promise information is on the Relationship tooltip; for CQUI or an unmodded game it's on the main tooltip.

Lenses
There is a new Military Promises Lense which highlights, in red, tiles that are effected by promises to keep your troops away from other empire's borders. This is only available if CQUI or More Lenses is installed and enabled.

The Settler lense now highlights city sites that would break the terms of a promise in yellow. This can be disabled by editing AKWDIP_DefaultOptions.lua, and setting:
HighlightNoSettlePromisePlotsOnSettlerLense = false

Diplomatic Briefing Panel
A new Diplomatic Briefing Panel has been added near the Unit Panel to give you advance warning of when your selected unit might be about to do something that impacts a promise. By default this shows when the unit is actively in a position that may effect a promise that has been requested (even you refused to make the promise), ie: an archaeologist is in the territory of a civ that has asked you not to dig up their artifacts.
When exactly when this panel appears can be customised by editing the options in AKWDIP_DefaultOptions.lua. For example, you could have it only show for promises that you have accepted; or have it show whenever there is a promise that might apply to the selected unit, even when that unit is not in a location that could cause a breach. There are options to set the behaviour for each type of promise individually.

Notification of Military Promise breach
If you have too many troops near the border of a civ to who you've just promised to keep your troops away, a notification will remind you to move them two turns before the inital grace period expires. If you later move troops back into the border zone, it will not remind you again, as there is no further grace period.
This can be disabled by editing AKWDIP_DefaultOptions.lua, and setting:
ShowNotificationForImminentBreachOf_KEEP_TROOPS_AWAY_FROM_ME = false

Compatibility
Works with any combination of DLC and\or Expansions, and should be compatible with most mods that do not replace DiplomacyRibbon.lua.

Is directly compatible with:

Any other mods that change DiplomacyRibbon.lua are likely to conflict.

Should work for Hotseat games, but not tested. Not tested in multiplayer, I've no idea if it will work for that - someone try it, and let me know?

Adriaman May 15 @ 7:41am
Is it compatible with Detailed Appeal Lens and More Lenses at the same time?

colhanindysolojones Mar 6 @ 11:55am
Thank you ever so kindly for the scorecard that is your mod! This'll help remind me what I promised, when and to whom!

Let'sAllPlayNiceAndBeKind Feb 15 @ 7:45am
Firaxis owes you money for making their game for them

Generic White Guy Jan 29 @ 4:28pm
The fact that this wasnt in the base game and STILL ISNT blows my fuckin mind. Thanks a lot for maintaining this and making it compatible with other mods. Probably the most essential mod there is.

Dear Technoluddite, it would be great if you could post a link to the mod with Russian translation on the page of your mod.