Store Page
Euro Truck Simulator 2>  Workshop > YouDriveSafely's Workshop
This item has been removed from the community because it violates Steam Community & Content Guidelines. It is only visible to you. If you believe your item has been removed by mistake, please contact Steam Support.
This item is incompatible with Euro Truck Simulator 2. Please see the instructions page for reasons why this item might not work within Euro Truck Simulator 2.
Current visibility: Hidden
This item will only be visible to you, admins, and anyone marked as a creator.
Current visibility: Friends-only
This item will only be visible in searches to you, your friends, and admins. 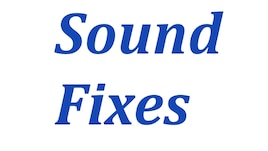 This item has been added to your Subscriptions. Some games will require you to relaunch them before the item will be downloaded.
In 1 collection by YouDriveSafely
Sound Fixes Pack Collection

5 items
Description
- Pack provides essential improvements to common sounds in the game for increased immersion.
- For over 6 years, this mod has proven to be a welcome addition for anyone wanting an immersive experience.
- The Steam Workshop version is highly recommended for quick and easy updates, maintained for the current game version.
- The mod is the most safe on the Steam Workshop, having procedures in place for adapting to major game updates.

Compatibility
* ETS2 1.44.1 + ATS 1.44.1. No errors in game log. Must have high priority in Mod Manager.
* Supported in single-player and multiplayer Convoy mode.
* Compatible with all maps and all trucks, including truck mods.
* Does not replace individual truck sounds, so this mod can be used with an unlimited amount of truck sound mods of your choice.

For further realism, the mod may also add official colors to each AI traffic vehicle it modifies for sound, with rarer colors less likely to be seen.

Official SCS forum link
The SCS Forum link below for the Sound Fixes Pack holds all official download links and is open to suggestions and questions about the mod:
https://forum.scssoft.com/viewtopic.php?f=212&t=200919

YouDriveSafely  [author] May 25 @ 4:25am
@MacT. - I did a quick flyover of some Baltic and Road to the Black Sea DLC regions. No errors detected so far on my end

MacT. May 24 @ 12:37am
YouDriveSafely, tnx for reaching back! ;) Hmm I think everywhere but last time was Road To Black Sea dlc regions. Actually happening in Baltic too. I let you know sooner or later more precisely or better directions.

YouDriveSafely  [author] May 23 @ 1:27am
@MacT. - You're welcome! Can I please get some coordinates on where you are getting this error? It would save me some time trying to look around every country searching for the error.

MacT. May 22 @ 11:58pm
Thanks for your hard work these years, YouDriveSafely!" ;)
So far I have seen with your fixes pack red errors on console with Mover and mover class. Pretty high place on load manager. Started happen with v1.44 update.

Makaroshka2359 May 17 @ 10:05am
why does it tell my friend that our versions are mismathed? We both are subscribed to this exact mod

Yeah sadly with the way it's setup in ETS2 and ATS, the rumble strip sound event is not linked with the tire noise event and both events can't play simultaneously... even though we can't have all of the truck wheels on the rumble strip haha

INSTG8R™ May 12 @ 5:58am
Thanks for clarification. I’m glad and good to know it’s just not your doing and as someone with an audio production background I totally understand.

YouDriveSafely  [author] May 11 @ 10:18pm
@INSTG8R™ - Thanks! Yep I am aware of the "random" pop when crossing out of the rumble strips. It happens because the rumble strip sound is a whole separate sound event rather than being included with the asphalt sound event.

INSTG8R™ May 11 @ 6:26am
Just a slight addendum to my previous post. The "pop" is random I can't replicate it consistently when running over rumble strips the occurrence is "random" but definitely obvious.
< >