Store Page
American Truck Simulator>  Workshop > YouDriveSafely's Workshop
This item has been removed from the community because it violates Steam Community & Content Guidelines. It is only visible to you. If you believe your item has been removed by mistake, please contact Steam Support.
This item is incompatible with American Truck Simulator. Please see the instructions page for reasons why this item might not work within American Truck Simulator.
Current visibility: Hidden
This item will only be visible to you, admins, and anyone marked as a creator.
Current visibility: Friends-only
This item will only be visible in searches to you, your friends, and admins. 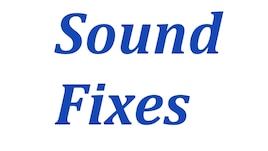 This item has been added to your Subscriptions. Some games will require you to relaunch them before the item will be downloaded.
In 1 collection by YouDriveSafely
Sound Fixes Pack Collection

3 items
Description
- Pack provides essential improvements to common sounds in the game for increased immersion.
- The goal of the mod is to make the game's sounds feel like real life. The mod will have regular updates to cover more sounds to add immersion. Thus the Steam Workshop version is highly recommended for quicker updates.

Compatibility
* ETS2 1.37.1 + ATS 1.37.1. No errors in game log. Must have high priority in Mod Manager.
* Compatible with all maps and all trucks, including truck mods.
* Does not replace individual truck sounds, so this mod can be used with an unlimited amount of truck sound mods of your choice.

* Retro/historic ding sound for while the fuel is pumping (circa 1960s to 1970s). The number of dings can help give you an idea on how much you refueled.

* Realistic wind sounds when opening the window at high speeds.
* Realistic tire sounds (optimized for interior view) on asphalt roads, giving you a better sense of the speed of the truck.

Official SCS forum link
The SCS Forum link below for Sound Fixes Pack holds all official download links and can be used to give feedback and ask any questions about the mod:
http://forum.scssoft.com/viewtopic.php?f=212&t=200919

RFS May 22 @ 8:38am
I didn't notice any difference with this mod. It is in high priority in Mod Manager. How do I fix it?

Akima May 22 @ 12:11am
Update 2: Nope definitely still does it with this food tank trailer. You can reproduce it by toggling the handbrake on and off. It doesn't squeak every time. It does it maybe once every 3 times. It's audible in 1st and 3rd person. I don't know if it's an SCS sound or one of yours.

Akima May 21 @ 11:54pm
Update: I am now hauling a new trailer (a food trailer) and I don't hear that squeaking sound when I brake. So the sound may have been trailer related and was probably an SCS sound, not one of yours.

Akima May 21 @ 11:29pm
Thanks for the response, however, it's not a whistle I am hearing. It's a squeak. It sounds like some part of the truck is bending or rubbing against another part. I can no longer hear the satisfying air brake sounds over the top of it.

Note: I could be hearing this in either third or first person. I use both modes regularly.

@Akima - The brake whistle is at the lowest possible volume to still be noticeable from the outside views or with the window fully open.

It's not louder than the air brake sounds in the mod but it is a high frequency sound like in real life, which I think is what you mean by it being loud. I might finetune it to reduce some of the high frequencies if absolutely necessary.

b_bevins2014 May 20 @ 7:01am
love the brake sounds too. not to found with the wind noise. haven't figure out how to mellow that down yet, but a very good mod that brings realism to the game. Thank you.

YouDriveSafely  [author] May 17 @ 12:59am
@Sanguinem Luna, @Old Timer - Glad I could spark some joy with the brake squeal sounds! I love reading comments like this. :)

I haven't had any issues with volume sliders resetting yet, but I'll keep monitoring in case I can reproduce the problem. I'll definitely be focusing on improving the open window experience in the coming updates.

@Phoenix20201 - I haven't had any issues with sound cutting out, but I'll keep monitoring if there's a problem