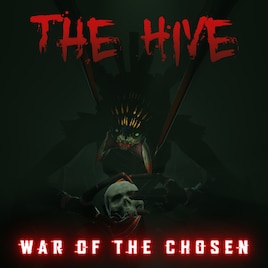 XCOM 2: War of the Chosen
Required items
This item requires all of the following other items
X2WOTCCommunityHighlander v1.23.2
Reward Decks Refresher
Created by

TheTommyTrials
Offline
See all 2221 collections created by MrShadowCX and other people (some may be hidden)
You need DLC to use this item.

Special thanks to Robojumper for helping with the initial code for the Queen to act like a Ruler and NeIVIeSiS for added help on targeting icons (more to be added later). And to Sacred Soul for all his early support on the mod wit ideas and early Queen concepts of which we managed to add in a way to honor him. Hope he likes it ;)

Hive Queen
1. Queen Slash (can cause Chrys Poisoning)
2. Queen Heal (like Prime Reactions/every time she takes damage she will auto Regen some back. Also has a Massive heal she can use up to twice a battle that heals 10HP per use)
3. Hive Domination (used to dominate Chrys that are on Adv's side)
4. Queen Spit (Goo spit works like frost and can be healed with any Medikit or Gremlin that can heal Frost)
5. Retreat like other Rulers.
*Hive Call (Random)*
Will show up for the first time at or around Force Level 13

Almost every Chrys in the hive can be researched when killed.


Rippers allow for Ripper Grenades to be built. These act like Needle Grenades from XCOM EU. Needles pierce though cover and solid objects to damage enemies but will not destroy cover or map objectives. Can be upgraded to Ripper Bombs later.

PCS: Tactical Withdraw = Grants the user a mobility and dodge bonus as well as the ability, Get To Da Choppa. This ability can only be used in the evac zone and gives all human allies outside the Evac Zone +10 to dodge and +6 to mobility for 1 turn. User must not evac until all allies have taken their turn or the effects will be terminated, Now... GET TO DA CHOPPA!!!

Warriors offer 2 new PCS Chips.
PCS: Tactical Senses Offensive = Grants a boost to Dodge, Will and Mobility on the soldier for a short time when using Hyper Reactive Senses. Also has a permanent small boost to Mobility and Offense.

PCS: Tactical Senses Defensive = Grants a boost to Dodge, Will and Mobility on the soldier for a short time when using Hyper Reactive Senses. Also has a permanent small boost to Mobility and Defense.

Brood Mother grants a one time build Brood Gauntlet. This Gauntlet is a living organism that spews fire (like a flame thrower) But also has a tongue pull that is a free action and does not break concealment. This pull however, is meant to pull allies up to higher elevation and or from harm. The Gauntlet also lets you can in a Single Ripper that you can use as a scout, attack with and run up to enemies and sacrifice as a mobile Needle Mine.

Hive Queen grants a new Ruler Armor. This armor grants all her immunities, added HP, Armor and the ability to call in your own random Chrys follower(s). The Armor has 4 cosmetic Helms you can equip as well.

The Juvenile Queen and Hive Guard will offer you a one time build added weapon attachment for the Hive Queen Armor's Back. Hive Queen Wings and Guards Acid Cannon. Youll also start with Rending Claws on the Armor, that work like the Chameleon's claws. the Claws allow for rending/rupture and wall climbing, the wings allow you to fly up to higher elevation and dive bomb and the Acid cannon allows you to fire a glob of acid across the map and Grants Juggernaut... a form of wall breaking that is triggered by you, grants you an Action points back when used so you can run though walls and still have full actions to take the fight to the enemy. Or carry a fallen ally to safety.


MUCH MUCH more! New Sitreps as well a Rogue Hive faction. These are the Chrys that follow the Hive Queen. They can show up and attack EVERYONE. They will fight other Chryssalids that are on Advent's side. At any time when the Hive (Advent or Rogue Hive are in play, more Chrys can show up from either side)

KEY NOTES HERE
1.
The Hive Queen is a Ruler. However, she does not have Ruler Reactions because of the type of abilities she has. If she had the ability to react the way the other Rulers do, it would be WAY OP.

The Pineapple Lord Jan 6 @ 5:45pm
I've skimmed through the description multiple times, I might be missing something because it's super late but XCOM is life, but are rouge ADVENT pods part of this mod as well? I had a VIP escort mission and there were 3 ADVENT pods and 3 "HIVE" pods but the HIVE pods were all ADVENT and Alien units with purple HP bars. I also had the Royal HIVE Sitrep or something. Is this a bug? Am I tripping? Did I miss something in the description? Thanks for any answer I get lol awesome mod regardless!

ObelixDk  [author] Jan 1 @ 5:06pm
the helmet shouldnt be availible until you get the armor, if you have a mod that opens for the cosmetics before that, it will open up for it to be included in the generation of new soldiers.. sry

The Pineapple Lord Jan 1 @ 11:32am
Sorry to bother, but is there a way to keep generate soldiers from spawning with hive helmets?
It seems all my recruits generate with these helmets, thanks for all your guy's work

Milf-Hunter Dec 29, 2021 @ 2:48am
Guys sorry if this has been answered before, how do i make it run nicely with LWOTC ? The faction spawns but has no AI doesent do anything ( Thank you in Advance

Stolas Dec 29, 2021 @ 1:04am
Made the mistake of using this with Multiple Sitreps Guaranteed and The Hive was out of control with sitreps Feral Hive, Hive Off The Grid and Hive Royalty oh and there was an alien ruler archon on the map and then of course Advent and the aliens there were over 100 units killed by the end of the mission it was ridiculous

patrickevans61 Dec 27, 2021 @ 8:40pm
not missing any it only takes 2 an got both
i gonna unsubscribe from all an start over an see what the hell thanks thou