Store Page
Arma 3 >  Workshop > Grezvany13's Workshop
This item has been removed from the community because it violates Steam Community & Content Guidelines. It is only visible to you. If you believe your item has been removed by mistake, please contact Steam Support.
This item is incompatible with Arma 3. Please see the instructions page for reasons why this item might not work within Arma 3.
Current visibility: Hidden
This item will only be visible to you, admins, and anyone marked as a creator.
Current visibility: Friends-only
This item will only be visible in searches to you, your friends, and admins. 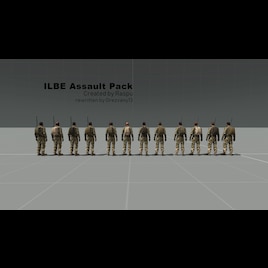 This item has been added to your Subscriptions. Some games will require you to relaunch them before the item will be downloaded.
In 1 collection by Grezvany13
13th Cavalry Default

24 items
Description
ILBE Assault Pack - Rewrite
This mod is a rewrite of the ILBE Assault Pack (TFAR) mod made by Raspu.
With permission from Raspu I have rewritten several parts of the scripts and config to make it fully working again.

Simply download the mod from the Steam Workshop, enable the mod in the Arma 3 Launcher under the "Mods" tab, and start playing!

Contributing
Found a bug, have a great idea for a new feature, or want to help working on this mod; then come over to the GitHub[github.com] repository. You can also join the Discord[discord.gg] server for questions and feedback.
If you have content available (like re-textures), and would like to have them included; simply join the Discord server and tell/show us what you have!

This mod contains models, textures and scripts by Raspu which are released under (APL-SA)[www.bohemia.net].

War-cursed Feb 14, 2021 @ 1:14pm
The mod doesn't keep the ears locked to what ear you set it to when setting up multiple LR channels

Grezvany13  [author] Dec 9, 2020 @ 2:42pm
@Mouse; it's on my todo list to make the SATCOM work like the Spike Antenna, but it's pretty hard to make it work properly. Similar to full ACRE support.

And if you look down 2-3 comments, there's a link to an ACRE version (based on the old version of this mod)

Grezvany13  [author] Dec 3, 2020 @ 5:20pm
@Mouse I believe there is, but without a working SATCOM (as in; increase range on the radios). And afaik is there no full ACRE support at all yet, only empty backpacks with different antenna's

Ellman | Server: Kronos Aug 11, 2020 @ 3:43am
@Digger there is a ILBE mod for acre but doesn't work the same way as for tfar due to the way acre handles the radios. Acre currently doesn't have the ability to integrate a radio into a backpack and instead you have to put the "radio item" into said pack.


This is the ACRE version
It's more for looks rather then fuctionality.

Ghost-G339 Aug 9, 2020 @ 4:27am
Ok so I have history TFAR and have interest in this mod, but my friend in a unit I thinking of joining uses ACRE and I do like what they do, could you make an ACRE version?

I have one last question, if you don't mind:

Let's say I have a 152 which is boosted with a SATCOM antenna. So my range is now somewhere around 20 km. If I transmit a message to someone who is 15 km away who also has a 152 (but his range is only 5 km), will he be able to hear me? What if he tries transmitting, will I be able to hear him?