Store Page
Hearts of Iron IV>  Workshop > maverick's Workshop
This item has been removed from the community because it violates Steam Community & Content Guidelines. It is only visible to you. If you believe your item has been removed by mistake, please contact Steam Support.
This item is incompatible with Hearts of Iron IV. Please see the instructions page for reasons why this item might not work within Hearts of Iron IV.
Current visibility: Hidden
This item will only be visible to you, admins, and anyone marked as a creator.
Current visibility: Friends-only
This item will only be visible in searches to you, your friends, and admins. 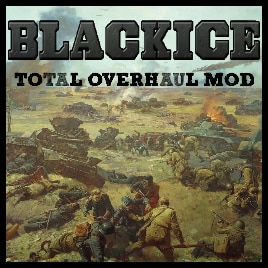 This item has been added to your Subscriptions. Some games will require you to relaunch them before the item will be downloaded.
In 1 collection by maverick
Blackice

3 items
Description
BlackICE - Historical Immersion Mod
Black ICE is a mod which aims to overhaul HOI IV in order to make a more immersive, historical, and challenging experience for the player.

It is recommended to play BICE with Historical AI Focus on. Ahistorical gameplay will lead to unexepected stuff and might even CTD.
If you report them to us we will fix them.

BICE adds in a huge array of new units, equipment types, country specific armor, aircraft and ships for all the major nations.
National Focus trees have been worked on for all the majors and many of the minor nations, often thanks to other mods which have generously allowed BICE to use their NF trees.
Laws and politics are greatly expanded and allow for great detail in how you choose to run your nation.
We have also worked on and expanded the OOBs, templates, and production for all nations. Some techs will provide new units, some will provide upgrades and some will provide new equipment for existing units.
To help offset the costs of equipment specialised factories can be built such as tank factories, artillery factories, small arms factories etc. These map buildings will lower the cost of the associated equipment.
The AI has also been improved, making it better than its Vanilla counterpart. It does due sadly not use the added naval and air trees, but always use the generic ones. We intend to get that working in the future.

BICE HOI IV is a huge and expansive work. If you played HOI3 BICE you will know what you are in for. If not, be warned BICE is not for the faint hearted. BICE tends to frighten casual players and takes a very dedicated and demands a serious and mature strategy gamer's attention.
To put it simply, BICE isnt for everyone. If you like high detail, complicated and multiple choices, options, and possibilities, BICE is for you.

Yukimura San Sep 18 @ 12:13pm
just a general question, is anyone else having an issue where intelligence operations are unavailable even after recruiting an agent?

canukgtp Sep 18 @ 3:41am
Thanks Jack, I'll have a closer look at the resistance stuff

Jack  [author] Sep 18 @ 1:56am
Could you both join our Discord? Im really interested why it doesnt crash for Mr. E O.o