Store Page
Age of Wonders III >  Workshop > Dr_K [Rosencrantz]'s Workshop
This item has been removed from the community because it violates Steam Community & Content Guidelines. It is only visible to you. If you believe your item has been removed by mistake, please contact Steam Support.
This item is incompatible with Age of Wonders III. Please see the instructions page for reasons why this item might not work within Age of Wonders III.
Current visibility: Hidden
This item will only be visible to you, admins, and anyone marked as a creator.
Current visibility: Friends-only
This item will only be visible in searches to you, your friends, and admins. 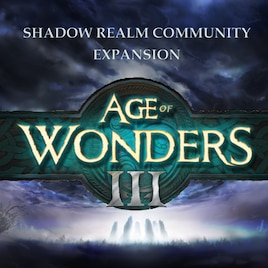 Gloweye
Offline
See all 141 collections (some may be hidden)
You need DLC to use this item.

This item has been added to your Subscriptions. Some games will require you to relaunch them before the item will be downloaded.
Description
BETA WARNING
----------
The Shadow Realm Community Expansion is currently in open beta! Most of the planned content is included, but all is not yet finalized. There may also be some game breaking bugs. The campaign is still a work in progress. Scenario 3 is still under development.

In particular, when you switch the expansion ON or OFF, please use the "Restore default" option in the first screen when starting a new RMG map. Otherwise you'll probably experience crashes. Theoretically, this should have been fixed in version 1.802, see here

There is a list of known issues on the official forums here[forum.paradoxplaza.com]. Reports of any other issues are more than welcome!

Anyone interested in helping with the continued development of this expansion can drop by this thread[forum.paradoxplaza.com] on the official forums. All ability levels welcome!
----------

The Shadow Realm Community Expansion is a coherent and relatively large package of additional content for AoW3 built by a team of more than 10 volunteers for over 2 years. It contains:
- 1 new layer, the Shadow Realm layer
- 1 new playable race, the Shadow Elves
- 1 new dwelling: the (living) Archons
- Other new units including Shadow Demons roamers and the Archon Legionnary
- Over 15 new sites including spawners, visit sites, and a new Heart.
- New Mystical City Upgrades for many of the new sites
- More than 40 new abilities
- 1 new campaign featuring 3 scenarios (scenarios 2 and 3 incomplete)

A full manual of the expansion is available here[age-of-wonders-3.wikia.com] on the AoW3 Wikia that details the newly added content.

Many thanks to Charlatan and Gloweye for their work on the Decodence mods upon which this expansion is based.

Other Contributors to the expansion:
Bob
vfxrob
Flenoom
Bagas
Popular Discussions View All (3)

Any map pack for this mod?
Ahrimansiah

Only thing mentioned is to "restore default" before any RMG creation, add each required mods and remove mods unrelated to Shadow Realm expansion, Shadow RMG mod, Decodence Map content, Wasteland Expansion and the compatible patch between Shadow Realm and Wasteland.

Use this 5 MODS only and try again to begin with "restore default" when you go into first screen of RMG settings.

When you get your game to work. You can try applying a 6th mod. Then a 7th and so on...

When you get a crash disable the last one added.

Cookiesnm1lk May 27 @ 7:10pm
so i'm surprised you made your own archons instead of using the existing ones. see "racial heritage"

Warpig May 1 @ 6:37pm
It would probably make more sense for them to make it compatible with yours.

Warpig May 1 @ 6:35pm
I understand. I consider your mod like an official expansion so naturally I hope all the mods i use will work with it. Seriously, It's absolutely top notch work.

Gladen  [author] Apr 18 @ 7:11pm
@Wodan I been investigating this topic. Its a lot of work and edits. Im not sure we will see a patch.

Warpig Apr 18 @ 2:06pm
Is there any compatibility with Empire building mod?

Either you find a Shadow Gate a purple portal or you did not press ”Restore Default" button before generating a map.