Store Page
XCOM 2>  Workshop > Favid's Workshop
This item has been removed from the community because it violates Steam Community & Content Guidelines. It is only visible to you. If you believe your item has been removed by mistake, please contact Steam Support.
This item is incompatible with XCOM 2. Please see the instructions page for reasons why this item might not work within XCOM 2.
Current visibility: Hidden
This item will only be visible to you, admins, and anyone marked as a creator.
Current visibility: Friends-only
This item will only be visible in searches to you, your friends, and admins. 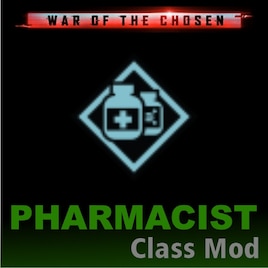 XCOM 2: War of the Chosen
Required items
This item requires all of the following other items
[WOTC] Extended Perk Pack
X2WOTCCommunityHighlander
[WOTC] New Promotion Screen by Default
Created by

Favid
Offline
See all 1161 collections (some may be hidden)
You need DLC to use this item.

This item has been added to your Subscriptions. Some games will require you to relaunch them before the item will be downloaded.
Description
[WOTC] Pharmacist Class
The Pharmacist is a support class tasked with healing allies and inflicting status effects on foes. They are armed with an Assault Rifle and a unique secondary weapon called the Stim Gun. The Stim Gun can be used to fire Recovery Stims at allies and Venom Stims at enemies. As one can probably guess, the Recovery Stim acts as a ranged medikit heal, while the Venom Stims are guaranteed to hit their target and inflict Poison. The per-mission charges for these abilities can be increased by equipping more medikits. Pharmacists also start with the Stimulate ability, letting them remove mental status effects from an adjacent ally once per turn. Think of them as being half way between a Specialist and a Medic, with some powerful crowd control abilities.

Unfortunately my artistic skills are lacking, so the Stim Gun model and effects are just those of the default Pistol. I know it's a bummer, but hopefully you can enjoy this class despite that.

Corporal
Survivor - Guarantees you will always bleed out on your first death on a mission, and reduces your wound recovery time.
Dedication - Free action. Activate to ignore reaction fire and gain a mobility bonus.
Pins and Needles - Venom Stims do some guaranteed damage, which increases with Stim Gun tier.

Sergeant
Steadfast - Grants immunity to disorientation, mind control, and panic.
Maim - Fire a shot with your Assault Rifle that immobilizes the target for a turn.
Bloodlet - Standard shots with your primary weapon now cause Bleeding.

Captain
Quick Stims - Activate this before using a Stim, and your next Stim will not cost an action.
Predator - Grants an aim and critical chance bonus against flanked targets.
Neurotoxin - Venom Stims now also disorient the target.

Brigadier
Combat Clinic - Fire a Recovery Stim at all allies that you can see.
Cold Blooded - The first primary weapon shot you take against an enemy suffering from bleeding, poison, burning, or acid burning does not cost an action.
Toxic Cloud - Grants a special dart that functions as a normal Venom Stim against the target, but also releases a large poison cloud in an area around them. Enemies in the area of effect take damage as if they were shot by a Venom Stim.

geh4th May 25 @ 5:11pm
I would also like to suggest that you consider using an alternate animation for the Stim gun.

An expedient solution that I think wouldn't be too inaccurate would be to simply borrow the Long War Holotargeter animations whole cloth for the Stim Gun. "Shooting" a Holotargeter isn't flashy (it's just the targeting animation), but I don't think that a Stim gun wouldn't be all that flashy anyway. Plus it is carried on the back, where it won't interfere with the animations for normal pistols.

Corbent May 4 @ 9:30am
Lol. I came here to ask the exact same thing as @Maldracai. I'm having a problem with combining the stimgun with a regular handgun (They kinda emrge together during animations) so I was thinking that placing the thing in the arc thrower slot might fix it.

Dr. Bots Apr 17 @ 9:30am
Finally I can have the Specialist be something other than a Medic.

Maldracai Mar 12 @ 5:49pm
Out of curiosity, is there any chance of having the stim gun sit on your lower back, like the Holotargeter and Arc Thrower?
Maybe also perhaps change the projectile animation to say, the little beam laser that the drones use to heal?

Favid  [author] Feb 26 @ 1:39pm
Finally got around to fixing the Savior issue. Sorry it took so long.

@nelVlesis The Recovery Stim uses the same values for healing that Medkits do. This is because it overrides the Medkit healing ability if one is equipped (similarly to the Specialist's Gremlin Healing)

neIVIesis Jan 1 @ 11:17am
How can I reduce the amount of healing a dart does to a single line of health as opposed to 4? This way it won't make medkits obsolete.