Store Page
XCOM 2 >  Workshop > Tzarnal - MoonWolf's Workshop
This item has been removed from the community because it violates Steam Community & Content Guidelines. It is only visible to you. If you believe your item has been removed by mistake, please contact Steam Support.
This item is incompatible with XCOM 2. Please see the instructions page for reasons why this item might not work within XCOM 2.
Current visibility: Hidden
This item will only be visible to you, admins, and anyone marked as a creator.
Current visibility: Friends-only
This item will only be visible in searches to you, your friends, and admins. 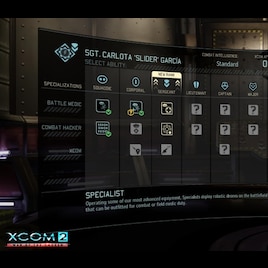 Tzarnal - MoonWolf
Online
See all 13865 collections (some may be hidden)
You need DLC to use this item.

This will only work with War of the Chosen!

Description
War of the chosen has two promotion interfaces. The old and trusted two column one and the slick new horizontal one that you get for Resistance Heroes and from the Training Centre. This mod eliminates the use of the old promotion interface for visual consistency.

You must have built a Training Centre in order to buy abilities with points. Without it it will simply allow you to select rankup abilities.

As a consequence SPARKs can now buy extra skills with XCom AP like a normal soldier could. They don't gain a line of XCom Abilities though.

Psi Operatives keep their old upgrade screen because they have their own unique promotion system.

Known Issues
Entering the promotion screen while on the gamepad control scheme crashes the game.

Compatibility
This mod overrides UIArmory_PromotionHero and will almost certainly not work with any other mod that overrides it.

Configuration
You can edit the XComPromotionUIMod.ini file to change some options.
* Setting APRequiresTrainingCenter to false will let you spend AP on abilities without needing to build a Training Center
* Setting RevealAllAbilities to true will show you abilities that would normally be hidden because a soldier lacks the ranks.

Custom Classes
This mod will try to look at a class' ability data and try to switch between 1, 2 or 3 abilities per rank automatically. However if that is not enough or not working as you need it you can manually override this behaviour with a .ini setting. Additionally you can change the cost of specific perks for a class.

Read this topic for details.

Credits and Thanks
* Robojumper who helped get this started, helped solve bugs and who is just generally a very helpful person to other modders.
* Musashi who contributed the additional abilities per rank and brigadier rank support.
* GingerAvalanche who contributed a compatibility feature for other mods who inherit from PromotionUI classes

License and Github
This mods code is available under the MIT license on Github[github.com]
Popular Discussions View All (4)

Jonatas Sep 11 @ 3:39pm
The screen is not different just because it's "Xcom weird UI choices".

The default promotion screen doesn't show which hidden abilities your soldiers rolled. You need to build the Training Center to see them.

In essence, with this mod you can see what abilities your soldiers have and pick your favorites (soldiers) without ever building the Training Center.

Faction soldiers work differently and that's why they use the Training Center promotion screen by default.

PS: I don't know if I should have made a thread instead, but this is more of an observation for anyone downloading the mod, so feel free to make one with this information if you want you.

xddragost Jan 26 @ 12:12pm
My warriors just got promoted from colonel to brigadier, but i cannot see brigadier level on promotion screen. Is there something i can do to fix this ?

thebeezneez1981 Nov 12, 2021 @ 8:58am
Concerning the Known Issue about the game crashing when using a gamepad; is this being worked on actively? As I can only play with a gamepad, this means I cannot use this mod at all, unfortunately. I would very much like to use it :)
< >