Store Page
Stellaris>  Workshop > silfae's Workshop
This item has been removed from the community because it violates Steam Community & Content Guidelines. It is only visible to you. If you believe your item has been removed by mistake, please contact Steam Support.
This item is incompatible with Stellaris. Please see the instructions page for reasons why this item might not work within Stellaris.
Current visibility: Hidden
This item will only be visible to you, admins, and anyone marked as a creator.
Current visibility: Friends-only
This item will only be visible in searches to you, your friends, and admins. 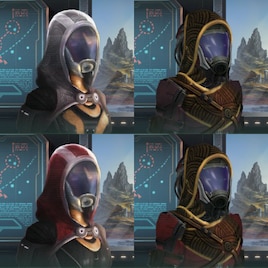 silfae
Offline
See all 1919 collections (some may be hidden)

Custom Namelist
As close to lore as possible, both for ships and characters.

Custom Room
No surface window available, based on the migrating flock room.

Custom Trait
Custom racial trait increasing research speed and decreasing adaptability. The trait cannot be selected on start, so, in order to use it, you must select the pre-made Empire.

Custom flag
The canon flag of the Flotilla.

Custom Empire
xenophobe, militaristic, spiritual Military Republic, using all the contents of this mod.
It is set as forbidden for AI use by default, but you can easily change this setting in game by following the instructions below.

Enabling for the AI
If you want to have the She'sesi be used by the AI as well, there's a very simple way to do that directly in game.

Compatibility
Pretty much everything. I'm not using any vanilla files, so it's very unlikely for something to conflict. I doubt this mod will conflit with anything at all.

Mod of the Week

Mythez Apr 26 @ 11:33pm
Wonderful work - I have included parts of your mod in mine but then got banned for not asking for permissions. Do you have any objections to your work being included in mine? I have already added you to the credits list.
https://steamcommunity.com/sharedfiles/filedetails/?id=2796778215

kroganwar22 Oct 4, 2021 @ 8:06am
Hi there! I hope you are having a good day, I am thinking about making a separate Mass Effect total conversion different from Mass Effect: Beyond the Relays. I would humbly ask can I have permission to use your mod to help me out in that process? I understand if that answer is no but I thought I would ask regardless. Of course I will give you credit for the hard work you've accomplished! Thank you for your time no matter the answer. :)

corsairmarks Aug 23, 2021 @ 6:07pm
I've updated the gameplay content from this mod (mostly the special starting system and custom empire) to work with Stellaris 3.0.* - you must still subscribe to this one for it to work. The species traits are also enhanced and the Quarians are now Void Dwellers.

Alu Apr 16, 2021 @ 8:16pm
So if I just delete everything but the portraits and other graphic folders the mod works just fine? In the sense that you can use it as a species portrait pack. Won't get a trait, the starting system, or the prebuilt civilization I assume but that's not what I'm trying to carry over.

flags, gfx, and localization should be kept... everything else deleted?

mrsnooker1998 May 25, 2020 @ 11:03am
Hello, I make big mod to stellaris, can I use your mod "Animated Quarian Portraits - Mass Effect" in my, of course if I add to steam workshop my mod i will add text that my mod include your. If you have any question to me about my mod please write to me. I please for some answer. Thank you very much.
< >