Store Page
RimWorld>  Workshop > avil's Workshop
This item has been removed from the community because it violates Steam Community & Content Guidelines. It is only visible to you. If you believe your item has been removed by mistake, please contact Steam Support.
This item is incompatible with RimWorld. Please see the instructions page for reasons why this item might not work within RimWorld.
Current visibility: Hidden
This item will only be visible to you, admins, and anyone marked as a creator.
Current visibility: Friends-only
This item will only be visible in searches to you, your friends, and admins. 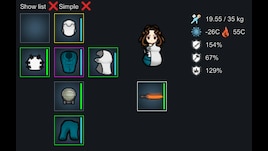 avil
Offline
See all 3257 collections (some may be hidden)

This item has been added to your Subscriptions. Some games will require you to relaunch them before the item will be downloaded.
Description
[V4.1] RPG style representation of the pawn's Gear Tab. That's a revamped version by avilmask.
Orginal mod: RPG Style Inventory by Sandy.

So, what the point of this yetanotherfork of an original mod? When I liked that mod've reverted to original layout, I was greatly unsatisfied with how it treated empty space. And I didn't really hate the "new" layout, I just thought it was unfinished and could be better. So I've collected the most of issues that mod had and addressed them in that fork.

Features
- none of the slots are hardcoded. They're still pre-defined, but through xml-defs;
- mod figures out empty columns and rows of slots and removes them;
- anchor mechanic helps the mod to deal with "mosaic" empty spaces between slots, making it look more consolidated;
- gear that didn't fit in the slots now displayed as a separate list of items;
- an option to RETURN "NEW" LAYOUT (called "simplified" in that mod, the "simple" switch). Hey, not everyone hated it. In fact, a lot of people that used alien races liked it. That's why I've made it possible to save the sate on race-by-race basis, so you can look at normal pawns using classic layout, and at exotic ones using simplified layout;
- you can now see, which slots are available to you, mod will show empty slots for them. Mod doesn't show slots for items that don't exist in your game, but you can enable it in options if you wish so. Mod also doesn't display undefined slots;
- border is thinner (so it fits default background) and color codes can be changed or disabled;
- a separate healthbar that is displayed over an item. You still can return the old "background" healthbar in options;
- it's now visible if item takes more than one slot;

Relation to other mods
- it still doesn't require any mods to work;
- it's compatible with A Rimworld of Magic (due to integration patch made by an author himself in original mod);
- it's compatible with Combat Extended, but I'm not sure how well. I've made a compatibility patch myself, but didn't really test it because I never played CE. So feedback is welcome;
- I've reused color selector from Quality Colors mod by legodude17, so here's a credit.
- it's compatible with sidearms;

languages
Languages that was updated for revamped version:
- engrish;
- chinese simplified by wycac;

비닐곰 Oct 26 @ 6:05am
"stocking up of medicine" feature might come from other mod.
AFAIK, both 'Smart medicine' and 'Awesome inventory' mods offer that 'stocking things' thing.

you might be referring to pick up and haul, which does let you carry more meds.

avil  [author] Oct 11 @ 1:33am
@Heuristics original mod didn't do it either, so if you'll use this mod with the same mod list, so probably yeah, your pawns will stock up on medicine the same way.

Atomic Oct 10 @ 9:30pm
This mod allows stocking up of medicine for pawns to carry it around with them right? Like the original RPG inventory?

muaddib069 Sep 19 @ 9:04pm
When I equip the crafting kit from Toolmetrics redux, it disables a large chunk of the gear UI. It doesn't seem to do this with any of the other kits

SILVER_BUL Sep 16 @ 2:05pm
btw can someone point me out what mods I need to have all slots

ODevil Sep 8 @ 6:49am
I'm getting this error: https://hastebin.com/hisokewobi.php
Not sure what causes it tho...