A sci-fi colony sim driven by an intelligent AI storyteller. Generates stories by simulating psychology, ecology, gunplay, melee combat, climate, biomes, diplomacy, interpersonal relationships, art, medicine, trade, and more.
$34.99
Visit the Store Page
Most popular community and official content for the past week.  (?)
Update 1.3.3200 improves defense tools and raid strategies
Dec 1, 2021
Hey everyone - here's a new update for RimWorld for all of you!

This wide-ranging update makes a variety of improvements - see the full changelog below.

One critical adjustment is in the proportion of different raid strategies. Previously, mechanoids were using breach raids far too often. I've been seeing feedback about this for a while, so in previous updates we did make some analysis tools and I tried to adjust things to solve it. Unfortunately, I missed the true issue and the problem persisted. After some recent feedback from Reddit, we made some more analysis tools to figure out what's going on, I was shocked to discover how out of whack the numbers were. I'm not sure how I missed this before, but the game wasn't acting anything like I intended. Please accept my apology for not fixing this earlier.

With this update, breach raids are now present but uncommon, with normal raids forming the main threat. I also tweaked the numbers for human factions so the mix of raid strategies should be healthily varied through the whole game. The game will now also reduce the likelihood of getting two raids from the same faction in a row.

Related to that, players' turrets have been buffed gently. Since we have raids that can handle turrets more intelligently now, we can make the turrets stronger against the attacks against which they are effective. All this is subject to ongoing adjustment, of course.

We also did a bunch of work to improve your ability to handle vegetarian, carnivore, and eat-anything colonists together. Previously, you didn't have the management tools needed to identify and separate these peoples' foods properly; now you do.

Biosculpters also have better feedback to help players anticipate the duration of the biosculpting cycles, since these durations change depending on who goes into the pod.

This update should be compatible with all saves and mods.

Many thanks to Nick Barrash for work on extremely fiddly meal-related AI and visualization, Matt Ritchie for helping investigate breacher issues, and Alex Mulford for helping balance player defense tools. Also thanks to TiaPixel for marketing help and to everyone who offered test feedback for the unstable build on the public RimWorld test Discord server[discord.gg].

As always, please don't hesitate to review Ideology on its Steam page!

Until next time,
Ty

Combat - Enemies
- Reduced termite mech's thump cannon range from 25.9 to 24.9.
- Added a way to make special per-faction raid strategy probabilities.
- Adjusted mechanoid raid strategy probabilities so that late game they use breachers about 33% of the time instead of 90% of the time.
- Breachers no longer want to attack passable player buildings. They only target impassable buildings like walls.
- Changed termite thump cannon's damage multiplier versus walls from 4x to 2x (so their damage versus walls dropped from 540 to 270). It now requires 2 shots from a termite to destroy a 300hp steel wall.
- Changed breaching axe's damage multiplier versus walls from 1 to 0.75 (so their damage versus walls drops from 75 to ~56).
- Selection weight of the most recent raid faction is reduced by 60% when choosing a faction for the next raid.
- Adjusted human factions' raid strategy selection weights for slightly more variation.

Food handling
- We now vary meal textures depending on ingredients.
- Food restrictions are automatically applied to pawns from ideoligions that require a specific food type.
- Meals now look differently depending on whether they were made from vegetarian, carnivore, or mixed ingredients. This will help you manage stockpiles of food for pawns with different dietary demands.
- Meal inspect strings now display information regarding their ingredients and who would accept eating them.
- With Ideology active, colonists will not automatically merge meals with different food kinds (i.e. meat only or veg only).
- Meal-related thoughts now display which meal caused the thought.
- Added food restrictions for meat or veg only meals.
- Added special thing filters for meat and veg ingredient-filled meals.
- Add insect meat food restriction and special things filter.
- Add cannibal food restriction and special thing filter.
- Don't apply ate meat thought if vegetarian eats human meat, allow strong cannibal precepts with meat eating negative precepts.

Misc improvements
- Reworked how tree-lovers respond to the destruction of trees to be smoother and more consistent. Tree Density ideo precept now has a mood penalty directly proportional to the number of destroyed trees, with no effect from biome.
- Biosculpter inspect string now says which pawn and cycle will be run while pawn has job to enter in progress.
- Add LookTarget to the cure message shown when using healer mech serum.
- Restored the healing message displayed after using a healer mech serum.
- Pawns can now install pre-built furniture even if it is incompatible with their ideo.
- When you r-click on a biosculpter with a pawn selected, we now show biosculpter cycles' durations in the context menu.
- Biosculpter's inspect pane readout now notes if biosculpting cycle is accelerated by precept (i.e. if the pawn is a transhumanist).
- Show biosculpter cycle duration for both normal and transhumanist pawns in cycle button's tooltip.
- Some research now requires high tech bench: brain wiring, compact weaponry, neural supercharge, biosculpting, specialized limbs, poison synthesis.
- Buildings in non-player non-hostile maps can no longer be claimed while there are members of the owner faction active.
- Slaves are now worth 75% of colonists in terms of map wealth and population.
- Terminals in worshipful villages now take 3 seconds to hack.
- Changed slag steel chunk mass from 5 to 8 so it doesn't weight less than the steel you get by smelting it.
- Added a loading tip describing fixed wealth mode.
- Total tend quality info is now only displayed if the hediff disappears after a certain level of tend quality (since it's fairly useless otherwise). 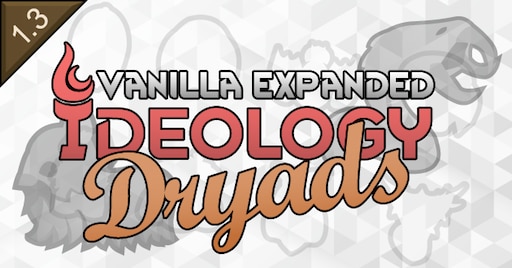 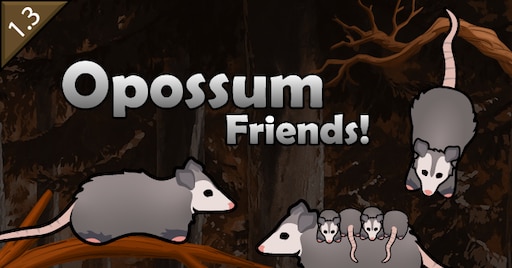 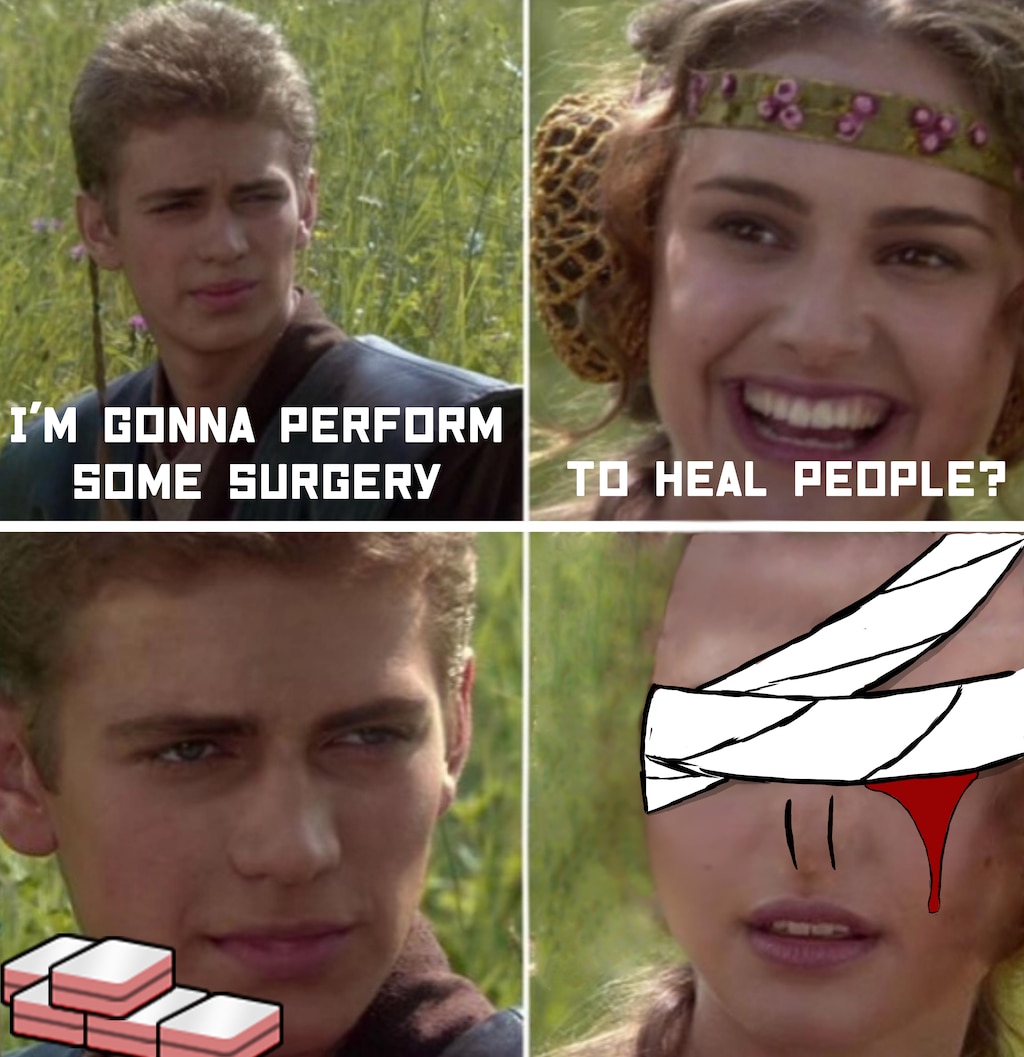 1
7
When Johnny Sins joins your community 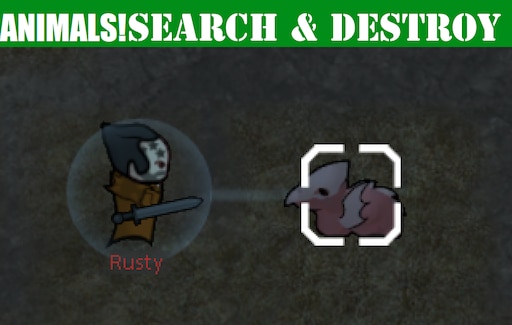 The Double Deadfall Trap
This guide will give an introduction on a trap type of my own invention. It utilizes a combination of a steel deadfall trap and an artificial roof collapse to give you the upper hand in a fight. It is fairly easy to do and even a tribal start can pull this...
38 ratings 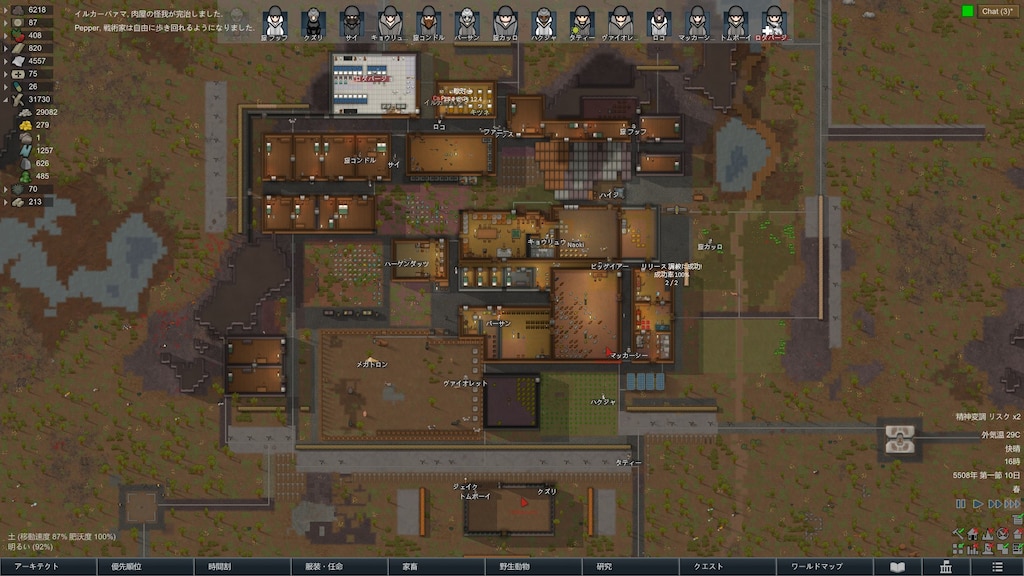 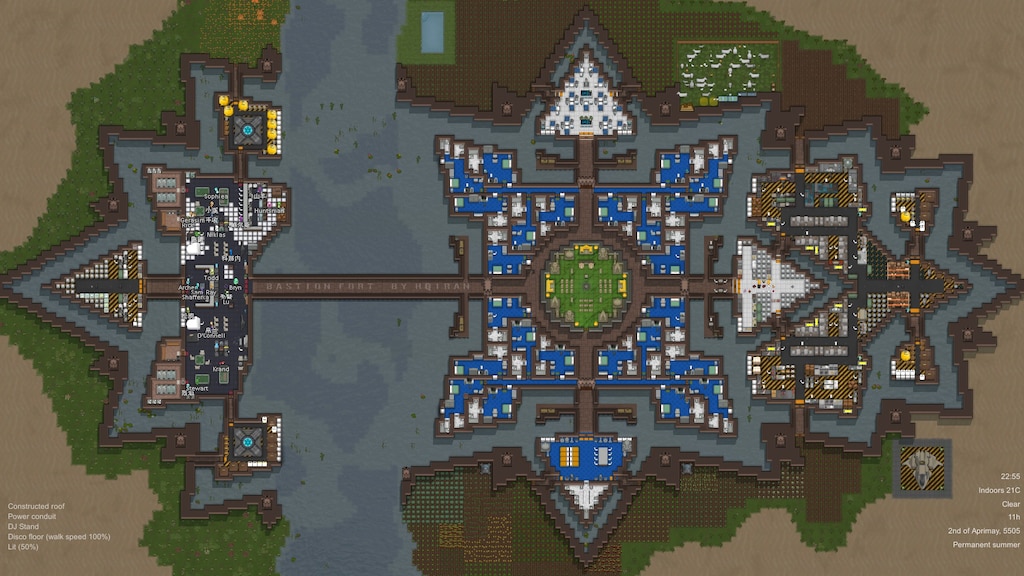 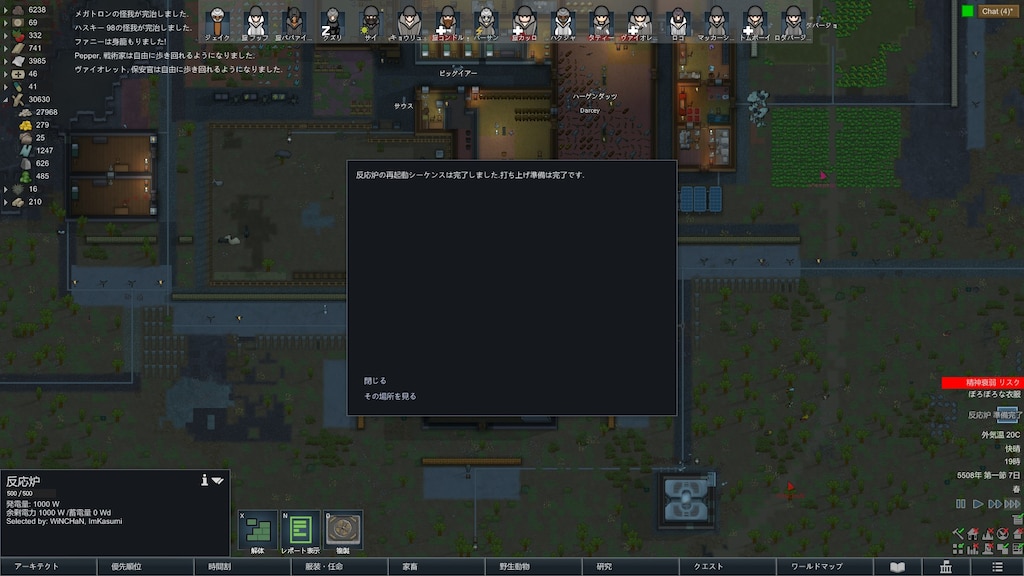 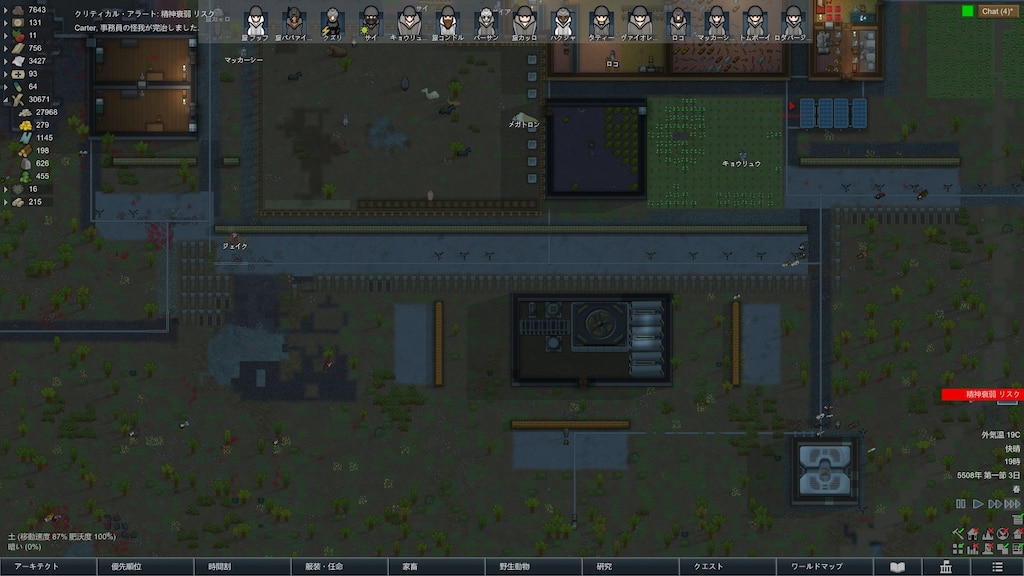 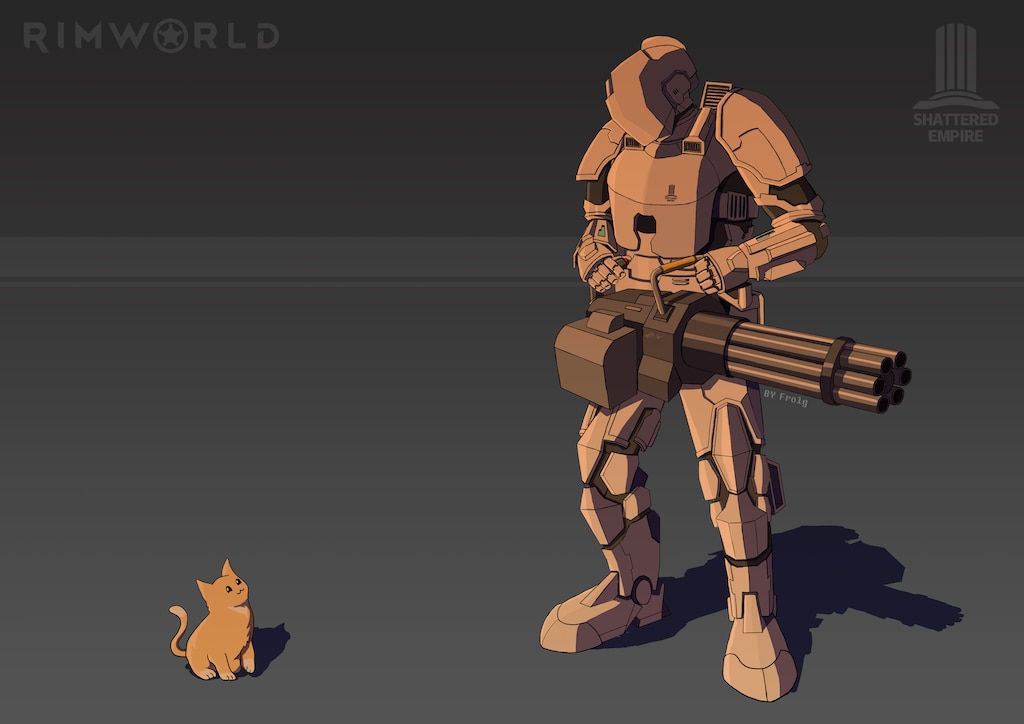 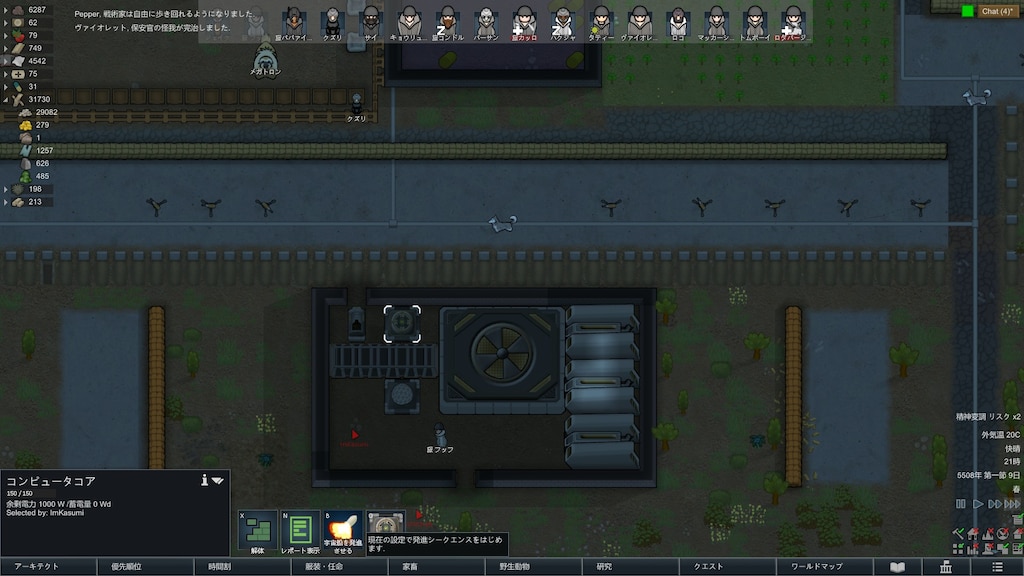 How to deal with mod errors/problems
First aid for mod problems and how to correctly report this.
26 ratings 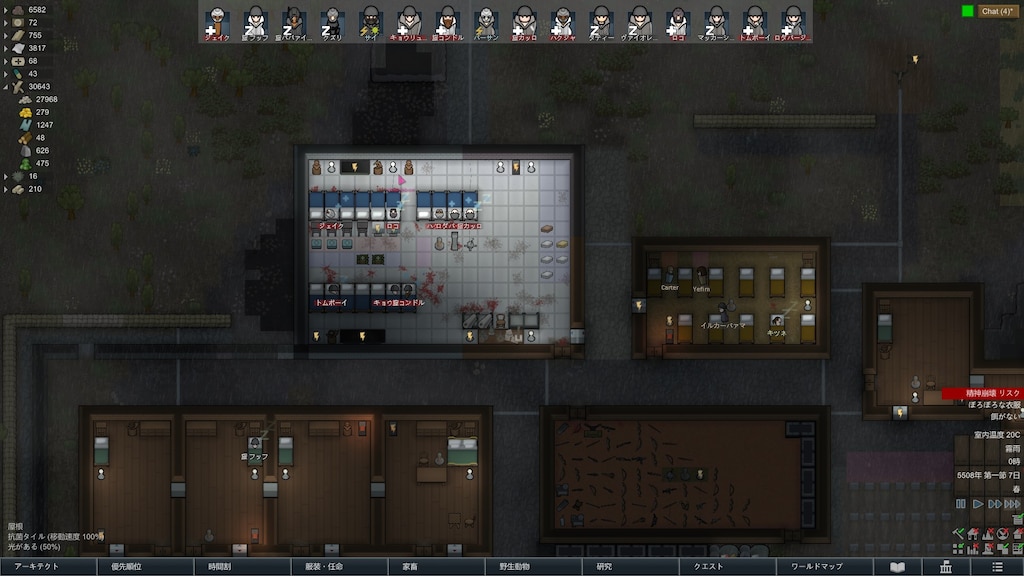 Recommended
2,067.8 hrs on record
Never even finished the game

Recommended
476.0 hrs on record
You either die an innocent or play long enough to become a cannibal/organ harvester/hat maker. 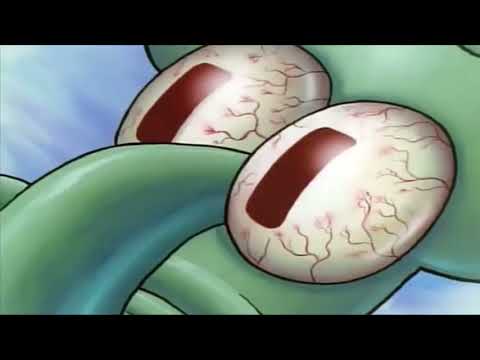 TreeMan
234 products in account
0
A New Rim... world!
You know, I've logged a lot of hours into Rimworld, mostly modded tbh lol. However, it just has me wondering what Rimworld would be like in 3D. The thought occurred to me while I was playing Going Medieval, and I was like. "Be cool if Rimworld were 3D." So I started imagining what the megaspiders and structures and gameplay would all feel like. Honestly this post doesn't really have any direction, I just thought it would be interesting if we got like a Rimworld 2 where it was 3 dimensional, where we coul...
9 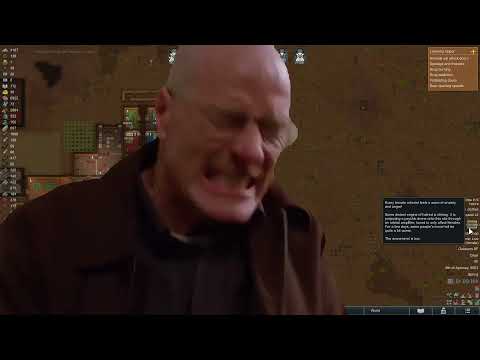 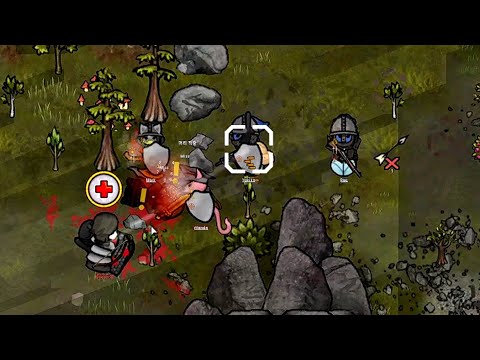 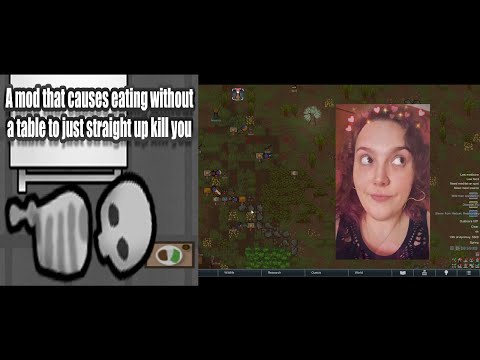 1850Ka
View videos
When to start raiding?
I have played this game for a year or 2, but I have only ever made it to early midgame and with at most 7 colonists. I've tried raiding MANY times, but the bases are always so populated and mortars are honestly useless (advice for mortars would be helpful)....
12

klirko
20 hours ago
General Discussions
dryads feel underwhelming
Finally got around to trying out the dryads and they feel a bit impotent? The amount of time I have to have a colonist invest in a tree vs 3-4 dryads to pick stuff up just doesn't seem that good. The melee and defense ones also seem to get overwhelmed pretty quickly and without direct control get in really stupid situations. Am I missing something?...
12

Nekochan
19 hours ago
General Discussions
Salvation Quest prisoner incorrect
Is it normal for on a quest to rescue a prisoner. Per say to someone you previously helped at your camp who then left after the mission end. Later to get contacted by them from a prisoner camp. But then you get to said camp and the dude your supposed to be looking for is nowhere to be found. Instead some other random slave is there instead....
6