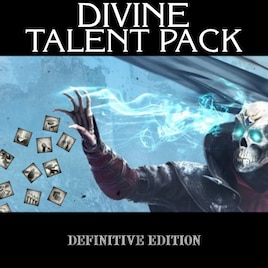 Zerd
Offline
See all 2637 collections (some may be hidden)

This item has been added to your Subscriptions. Some games will require you to relaunch them before the item will be downloaded.
Description
Adds a set of fully functional custom talents to Divinity: Original Sin 2.

These talents are not available during character creation. Instead, they are unlocked by interacting with the tablets found at the start of Act 1 and in two locations on the lower deck of the Lady Vengeance: on top of a desk in the study and stowed in a crate by the stairs. Players need an unspent talent point to acquire a custom talent.

Talents:
Bitter Tinctures - Your enemies' poison resistance is degraded by 20% for each turn they spend afflicted by your poisons.

Dog-Eared Grimoire - You gain a random scroll every turn that disappears at the end of your turn. The potential power of that scroll depends on your Loremaster ability, with master-level scrolls possible at Loremaster 6. Requires Loremaster 1.

Generous Host - Allows you to control an extra summon, but your AP is reduced by 2 if you start your turn with more than one summon active. Requires Summoning 1.

Invasive Species - A Corpse Blossom grows near a random enemy at the start of your turn. These are considered dead bodies for skill targeting, but only hold their shape for 2 turns. Requires Necromancy 1.

Quick Change - You can equip weapons and armor in combat without spending action points.

Reactionary - Perform a counterattack after evading an enemy strike within melee range. Can only trigger once during an attacker's turn.

Shadowy Figure - You attempt a free sneak at the end of every turn, and move at normal speed while sneaking. Requires Sneaking 1.

Unruly Guests - Allows you to control an extra summon, but summons not covered by your Leadership aura will go Mad when your turn ends. Unruly summons ignore the Leadership of Knocked Down, Stunned, or otherwise disabled characters. Requires Leadership 1. (Pairs well with a modest Leadership range increase.)

Voltaic Shell - When your Magic Armour blocks a Shocked effect, you become Overcharged for 1 turn, dealing massive magic damage with each weapon strike. Your Magic Armour depletes when the effect wears off. Requires Aerothurgy 1.

Compatibility:
This mod fully compatible with Larian's Divine Talents gift bag DLC. This mod is incompatible with mods that shapeshift party members or change the skills or statuses associated with Bull Horns, Medusa Head, and Inner Demon. For best results, this mod should be the last in your load order, or second-to-last with Armor-Based Saving Throws installed.

Credits:
The authors would like to thank Baardvaark for help improving our talent-adding method and creators of Epic Encounters for inspiring the Bitter Tinctures and Reactionary mechanics.
Popular Discussions View All (1)

kmcsjr Nov 10, 2021 @ 5:53am
Are these only available to the main character. My companions get a response that they should come back later

Grove of Blackweir Feb 27, 2021 @ 4:37am
Hey I want to edit the bitter tinctures talent to give -100% poison resist per turn, I've unpacked the mod file but I have no idea where i should be looking for the -25% poison resist function

AarkNoa Jan 10, 2021 @ 4:32pm
I have noticed that with the Shadowy Figure Talent, Play Dead seems to not work quite right
When you play dead and end your turn to go sneaky, the attempt works as an action blowing your cover
I'd like to add that I used the 'Book of Origins' mod to give Play Dead to my custom dwarven rogue and have not tried doing the same thing on an actual undead