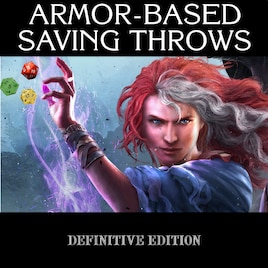 This item has been added to your Subscriptions. Some games will require you to relaunch them before the item will be downloaded.
In 1 collection by Pencey
Pence's Tougher D:OS 2

Features:
In vanilla D:OS II, any amount of armor will block a status effect. If a character with 75/100 magic armor gets attacked by a 25-damage Electric Discharge, their remaining 50 magic armor will completely block the incoming Shocked status. This mod would give that character a 50% chance to resist Shocked, because they have 50% magic armor remaining.

In addition, units are granted bonuses to armor saves through talents, stats, and defensive abilities, opening up new character builds and tactical considerations. Bonuses are detailed in-game on attribute and talent descriptions and listed in the combat log as saves are attempted.

Though ABST makes combat less predictable, players who take calculated risks will have new opportunities to swing the odds in their favor.

Compatibility:
ABST should be the last mod in your load order, or second-to-last if you're using the House Rules add-on.

This mod is fully compatible with Larian's Combat Randomizer add-on, and all of Odinblade's class mods, as long as ABST is later in your load order.

This mod is not compatible with other mods that change the way statuses are resisted, or any class mods I haven't added support for. Due to potential scripting conflicts, these should not be paired with ABST.

Delmar Oct 14, 2021 @ 8:11pm
Two things:
1) Could this mod be modified to work in Game Master Mode, or are there specific reasons as to why it doesn't?
2) It would be super awesome, if your Memory also added % chance to the status deflect chance!

secondgate Mar 7, 2021 @ 6:47am
Hello, I'm wondering if anyone knows whether ABST works with Odinblade's Scoundrel Class Overhaul, which was released after the last ABST update.

Alternatively, I'm wondering whether ABST is capable of handling novel status effects, such as those introduced in that mod.

xanax|Malkavian V Jan 15, 2021 @ 5:11pm
I was testing something else near the end of the game with this mod enabled, and out that on 0 magic armor, Source Drain from Source Vampirism procs twice.
Either 1 time + it says "Source Drain resisted", or I just flat out steal 2 source points.
Disabled every other mod, with just this one enabled, and it still did that

Jeido Oct 22, 2020 @ 2:40pm
Hi! Absolutely loving this mod. Would it be possible for you to make it compatible with GM mode? I can't find it in the modlist so I assume you only made it available for Story.

SilverStarGG Sep 19, 2020 @ 12:20pm
For some reason when using chicken form it seems to be calculated from MAGIC ARMOR instead of PHYSICAL ARMOR. Does anyone else have that problem?

NubileThighGaps Jul 22, 2020 @ 2:44pm
Also curious about if this can be applied to a save file. I also wonder is there a way to balance it a bit so that having a lot of armor isn't a negative for the player? Right now it seems like for the player if you regenerate your armor and you don't have much it puts you right back up to a high resist chance. But if you have a lot of armor it won't.