Store Page
Team Fortress 2>  Workshop > void~'s Workshop
This item has been removed from the community because it violates Steam Community & Content Guidelines. It is only visible to you. If you believe your item has been removed by mistake, please contact Steam Support.
This item is incompatible with Team Fortress 2. Please see the instructions page for reasons why this item might not work within Team Fortress 2.
Current visibility: Hidden
This item will only be visible to you, admins, and anyone marked as a creator.
Current visibility: Friends-only
This item will only be visible in searches to you, your friends, and admins. 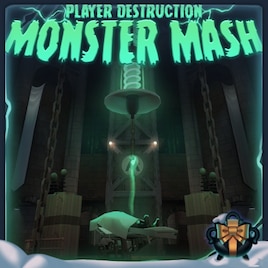 This item has been added to your Subscriptions. Some games will require you to relaunch them before the item will be downloaded.
In 1 collection by void~
Nightmare Before Smissmas - Winter 2017 Community Collection

404 items
Description
Looking for some player destruction dirty work this Halloween? Step inside the haunted halls of Monster Mash, where players fight to the death in a creaking castle to collect buckets of their enemies gibs to bring to a central, monstrous Reanimator.

Taking a more classic PvP approach to Halloween over our more eccentric map, Slasher, Monster Mash aims for rounds of quick, enjoyable deathmatch between players in an asymmetrically-artpassed radial map. Collect bucket of gibs as the player destruction pickups and bring them to the central capture zone when the shield is down. Fell into the death pit? You'll have a chance at redemption if you can make it out of the gauntlet run alive.

Have a graveyard smash this Halloween, and enjoy Monster Mash!

- Fixed Pendulums in the Underworld getting caught on non-player objects like Candy Pumpkins.
- Fixed a spawn door on RED being blocked by playerclipping.
- Removed finale kill trigger.
- Updated thumbnail for the Nightmare Before Smissmas community showcase.
Popular Discussions View All (5)

Lol is a trash
Dinasty

I was working in the lab...
Mythic_Pulse_Origin

Mystic Monkey Apr 23, 2019 @ 7:48pm
I loved this map. Was exploring it in GMod. I noclipped through the front door and wish the courtyard was part of the map. I noticed a mob of villagers and was curious how it was made. When I found out I LOL at how creative and funny it was.

《Languste》 Oct 30, 2018 @ 7:04am
I only played it an hour yet, but it is already one of my fave maps! I love the pd_ mode since Watergate, but the damn voicelines made my game crash and me unable to play :/ Nice textures and nice rooms, it looks pretty! Definitely will paly a lot more on it soon c: