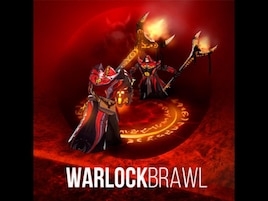 このアイテムがあなたの サブスクリプション に追加されました。いくつかのゲームでは本アイテムをダウンロードする為にゲームを再起動する必要があります。
解説
Warlock Brawl is the official Dota 2 mod based on the Warcraft 3 map Warlock developed by its original creators. In short it's a physics based arena game.

Is the WC3 Warlock map still being developed?
Yes, and version 1.01 is expected to be released very soon.
人気スレッド 全て表示 (17)

s00 3月22日 0時15分
Looking to play this! It reminds me of some crazy 2009 memories. Please do something in regard to the crashes on dedicated servers

Tora  [作成者] 3月16日 13時03分
I see, it crashes on dedicated servers but not on localhost, strange

Osgood Schlatter ♥ 3月16日 2時18分
after picking hero, loading, and disconnected from game.
when we try to reconnect, blank screen for a sec and back to home screen again.

this happens 3x in a row when we tried playing

Z.I.V 1月19日 2時58分
@Tora So can you at least take up the development of popularity? Very few players.

Tora  [作成者] 1月15日 9時29分
I fixed the crash and some other things that got broken by various Dota updates, should be working again. Meteor projectile doesn't show up atm.

Pablo Emilio Escoward 1月14日 12時35分
Can we do anything to recover this mode? Its so much fun!

Dead InSide 2021年12月29日 12時13分
Dont try strted this custom, because dota crashed and delete without compromised
< >