Store Page
Tabletop Simulator>  Workshop > Gazoxtahagen's Workshop
This item has been removed from the community because it violates Steam Community & Content Guidelines. It is only visible to you. If you believe your item has been removed by mistake, please contact Steam Support.
This item is incompatible with Tabletop Simulator. Please see the instructions page for reasons why this item might not work within Tabletop Simulator.
Current visibility: Hidden
This item will only be visible to you, admins, and anyone marked as a creator.
Current visibility: Friends-only
This item will only be visible in searches to you, your friends, and admins. 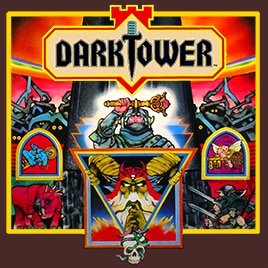 Gazoxtahagen
Offline
See all 89 collections (some may be hidden)

This item has been added to your Subscriptions. Some games will require you to relaunch them before the item will be downloaded.
Description
Here it is… this is the big one! Follow your scout, feed your beast, and crank up the 1812 Overture! My Tabletop Simulator mod for February 2017 is none other than Milton Bradley’s 1981 sued-out-existence classic, DARK TOWER!

(And all I had to do was teach myself Lua, Blender, and Unity animations and asset bundling… no sweat!)

Although the manual has mostly been transcribed into the notebook (edited for changes), Hasbro hosts one here: https://www.hasbro.com/common/instruct/Dark_Tower.PDF

Wherever I could, I’ve re-mastered the graphics on the Tower and on the board, and I’ve cleaned up any noise on the sounds. The Dark Tower itself isn’t a perfect re-creation, but I tried to make slight changes to the shape of it to make virtual play a little easier… the keypad is now convex instead of concave, for example. Please try to pick up the Dark Tower only from the bottom flared base; the AssetBundles are connected to it with Joints, which I’ve found to be unpredictable when going from B-to-A rather than A-to-B. The Tower is a OBJ mesh with five Unity AssetBundles joined to it: one sound block, one display core, two LCDs (which I plan on releasing separately in the Workshop for others to use), and one “blink screen” that goes over the LCDs and simulates them blinking. The keypad itself has GUI buttons just below the surface.

There are some changes between the actual board game and this Tabletop Simulator version (these are also written in the notebook):

* In the DARK TOWER board game, the players are P1, P2, P3, and P4. In this TTS version, the players are determined by filled seats, and are represented by R (Red), B (Blue), Y (Yellow), and G (green); the colors of the seats correspond to the colors of the kingdom crests. This allows for drop-in/drop-out play. Because there is no need to select the number of players at the beginning of the game, the level selection phase is followed by a selection of which player should go first (R1, B1, Y1, or G1).

* The scorecards are now interactive. Hovering over WARRIORS, GOLD, or FOOD on your scorecard will display the value in a popup. The other inventory items will light up when acquired, and darken when spent. Scorecards of vacant and vacated seats will darken, and will light up again when the seat is occupied.

* Because the Tower in TTS knows if a player currently possesses a PEGASUS token, it will not award that player a PEGASUS as treasure if they already possess one.

* In the DARK TOWER board game, if a player received a WIZARD as treasure and CURSED another player, and then pressed the CLEAR button to cancel the move as illegal, the CURSE would still be in effect. In this TTS version, the CURSE is lifted.

* In this TTS version of DARK TOWER, if a MOVE results in being LOST, the player's pawn will be returned to the previous space automatically.

* In this TTS version of DARK TOWER, if a FRONTIER is attempted with a KEY MISSING, the player's pawn will be returned to the previous space automatically.

* In this TTS version of DARK TOWER, if the HAGGLE button is pressed any time other than during a BAZAAR negotiation, it will toggle the buildings between their authentic board game colors and the seat colors.

* In version 1.0 of this TTS version of DARK TOWER, the screen was always visible to all players, and so each player was given a random Riddle of the Keys. This revision blocks the tower screen from the view of players whose turn it is not (in keeping with the spirit of the original game). Therefore, as in the original, the Riddle of the Keys is the same for all players again.

I tried to playtest this as thoroughly as I could, but if you find any bugs, I’ll be watching this space.

I definitely have a new-found appreciation for the code of the original Dark Tower, which is surprisingly sophisticated for the time (the programmer is believed to be Vince Erato, inventor of another keypad toy, the Big Trak). There’s a lot to juggle… food reserves, gold encumbrance, keeping a short history for the Repeat button, a robust inventory, and rogue invalid button presses.
Popular Discussions View All (7)

Gazoxtahagen  [author] Apr 15 @ 5:13pm
Hello, Christy. The default key to hide Tabletop Simulator's interface is F11. I'm led to understand on a Mac it might be Option-F11.

I just tried a single player game, hitting the Bazaar button on each turn and Haggle on whatever Warriors cost (unless 4, which is the lowest and will result in an automatic Close). The RNG was pretty brutal, but out of about 10 turns I got 3 successful Haggles. It looks from the code that everything is working properly. The rule book says the odds of a Haggle working is "approximately 50/50," so I set it to 48%, which is as close to 50/50 as I dared get.

If you'd like, save the game locally and then find and modify this function in the script to suit your tastes:

CrystaljDesign Apr 11 @ 9:48am
Thank you so much, this is really incredible! The pdf link in your description is now 404ing. Here is one from Hasbro: https://www.hasbro.com/common/instruct/Dark_Tower.PDF

When playing single player, if I try to buy something at the Bazaar in my home territory it closes every time. Not sure what I'm doing wrong.

Gazoxtahagen  [author] Jan 27 @ 7:36am
I might as well add this here: Restoration Games has begun Kickstarting a sequel to DarkTower, called "Return to Dark Tower." This seems to indicate to me that the legal issues around DarkTower must have largely been ironed out. I've always owed this mod's continued existence to the fact that no single entity would or could claim ownership enough to request a takedown. That no longer appears to be the case. Obviously, I hope this mod continues to be allowed to exist, but if you do enjoy it, I encourage you to act as if it could vanish from your subscriptions at any time (for example, saving the game locally once you've loaded it from Subscriptions).

Gazoxtahagen  [author] Jan 27 @ 7:29am
It is a feature! The original board game rules make it pretty explicit that other players are not allowed to see your display while it's your turn. There's no way to enforce this in TTS; you can't know if your opponent has swung their camera around.while it's your turn. I am considering adding a "Settings" interface to the game which will allow this to be optional.

Jack G Special Jan 26 @ 9:45am
Re: Dark displays on the tower. I just finished re-reading the rules and the note at the bottom the Workshop description of the game. It's a feature, not a bug.

[42] Primus Zod Jan 25 @ 11:00pm
Also, Dark Tower never seemed to recognize when I pushed the lit Pegasus button on the score card because the Pegasus never showed in the Dark Tower when I did it. Thanks for this game, though. I'm new to TTS, but this is by far my favorite part of the experience so far.

Jack G Special Jan 25 @ 10:59pm
I don't know if this is also an error, but my friend and I could not see each others tower results. We could hear the effects but not the LED display or back lit pictures unless it was that players turn. We playing Red and Green. I was hosting as Red player.
< >