Store Page
Company of Heroes 2>  Workshop > SneakEye's Workshop
This item has been removed from the community because it violates Steam Community & Content Guidelines. It is only visible to you. If you believe your item has been removed by mistake, please contact Steam Support.
This item is incompatible with Company of Heroes 2. Please see the instructions page for reasons why this item might not work within Company of Heroes 2.
Current visibility: Hidden
This item will only be visible to you, admins, and anyone marked as a creator.
Current visibility: Friends-only
This item will only be visible in searches to you, your friends, and admins. 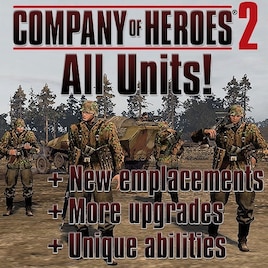 SneakEye
Offline
See all 1860 collections (some may be hidden)

This item has been added to your Subscriptions. Some games will require you to relaunch them before the item will be downloaded.
Description
2014, 66 new units .. and a LOT of feedback from the community!
2020, 170 new units .. new upgrades / abilities .. customized artwork .. and new mechanics!
This mod adds a ton of content while maintaining the vanilla gameplay.

All unit stats like damage/armor/health have remained the same as in the vanilla game!

Final note - 27 July 2019
After almost 5 years of development, the mod is finished! I'm very proud of the current state of this mod and could never achieve this without the valuable feedback from the community! I will continue to support this mod, but further updates will mostly contain bug fixes and main game update integrations.

Maybe it is not perfect, but I hope you can understand that choices had to be made and keep the balance in mind. My highest priority: Have fun!

Many thanks for your support!

***Please read the FAQ before you post your question!***

Copyright 2020 [SneakEye]: This item is not authorized for posting on Steam, except under the Steam account named SneakEye
Popular Discussions View All (100)

Mod doesn´t want to download and bugs the steam after some seconds.
Michel Temer #melhorpresidente
< >
7,285 Comments

Wehrmacht:
- Repair and Recovery truck no longer has debuffs while using its abilities.

Global:
- Most defenses which required command points now require tech.
- Upgrades which change the gun of a vehicle now cost a little fuel and manpower rather than ammo. (Affects: 221, Panzer IV F1, Valentine, Calliope, Pershing, IS-2)
- Build times and call-in cooldowns for many vehicles tweaked to be more consistent. Times are relative to the unit size.

Bugfixes:
- Some airstrikes could still be used in command sectors.
- The accuracy of PTRS rifles increased to be more in line with the Panzerbüchse and Boys (No changes to the Guards varaint which was already stronger).
- Paratroopers from Airborne Support Center have their costs equalized with other abilities from 380 to 360.
- Squads who are constructing buildings now all have increased received accuracy. Most already had this, but some had increased received damage and a few had no debuff at all.

Interesting: based upon what you have already managed to do I would never have guessed that there were such limitations.

So if only because of how far this modification has come already; and the fact that a lot of people including myself like this modification some of whom have gone as far as to say that they find the base game unplayable without it: it sounds to me like we need to petition relic to improve their modding tools and get rid of said limitations...now how do we go about doing that..?

SneakEye  [author] Sep 21 @ 7:01am
@Demonic Cookie, The Hetzer was created by changing its gun state and spawning a projectile. The Sherman Crocodile needs a flame that is attached to its gun, which is the part that won't work. All vehicles with flames have their flame animation included in the model. Other vehicles don't have that and models are not editable.

Demonic Cookie Sep 21 @ 6:53am
I would have thought that you could make a Sherman Crocodile.

Wasn't the AT Hetzer made by removing the flamer function and idk adding a stug's gun traits?(bare with me, I don't know much about modding). If a flame Hetzer can be made into an AT version, can't the same be done in-reverse to a Sherman's 75mm gun?

SneakEye  [author] Sep 20 @ 9:55pm
@Commander-LVJ,
The mortar bunker and pantherturm require the Battle Phase 2. The bunker requires command point because it is included in a commander. I agree that this is not consistent and will review the requirements. Both models are leftovers from CoH1 and the markers are not working correct to hold infantry.
The Sherman Crocodile cannot be made as an movable unit due the limits of the modding tools. That is the whole reason why the emplacement even exist.

On a somewhat unrelated topic I also noticed that the concrete bunker requires I think it was 3 command points(?) whereas the mortar bunker and pantherturn do not require a certain command point level in order to be built: were you aware of this?..if so then why is this?..because they are as tough as they are and well are bunkers as well would it not make more sense to require a certain number of command points in order to be able to build the both of them as well?

I also see that the mortar bunker and pantherturn cannot garrison infantry; now I do not know how closely you want to stick to the original game however seeing as how they are bunkers and that is kind of the whole point of them would them being able to garrison some infantry not make sense?

So because the USF had an emplacement with the sherman crocodile I thought that they also had the actual tank; however as I have just recently realized this is not actually the case, so a couple of questions:

!. were you aware of this?..If so then why has it not been added?

Demonic Cookie Sep 18 @ 5:16am
At least rename it to "All units, but not really" or "All units, reworked and expanded balancing"

Demonic Cookie Sep 17 @ 11:30am
Please make all units, just that, "all units". None of the non-vanilla units, and reworks. I hate what has been done to brits and changes to a fair few commanders.
< >