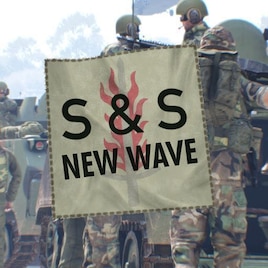 This item has been added to your Subscriptions. Some games will require you to relaunch them before the item will be downloaded.
Description
Sus and Sus
Service and Supply
Episode 2

The Reading of this Rather lenghty text is highly advised
Supplies for disco and headbanging parties. utilisable pieces of wearables from the later-half of the cold-war, primarily 70s-80s-early 90s-era US military.
This addon is composed of low quality outsourced asian laboured 20% polyester, 40% synthetic ripstop, 40% Spastic nylon Blend, Woodland Camouflage

Don't ask whether x or y is planned, nothing is planned so there will never be an answer
Dependency
to minimalise dependencies other than base S&S mod, New Wave includes no units/groups by default as these and only has arsenal items. feel free to make your own compositions for groups/units
this dependency is needed due to the amount of shared assets (like flak vests, grenade vest, webgear parts, jungle boots.)

Ranked Uniforms
S&S includes a modified version of KP Ranks, which (currently) only works for S&S Uniforms. in an MP game, the host can assign ranks to players via the KP ranks menu which is accessible through the in-game context menu. All credits to Wyqer for the original KP ranks code
Source code : https://github.com/simcardo/KP-Ranks

Full list of items can be seen in our BIS Forum Thread[forums.bohemia.net]

Files
This pack has been configured to be rather modular so that you can remove certain files if you wish to not play with certain things.

If you do enjoy the content, please consider buying Justin a coffee (:[www.buymeacoffee.com] or supporting vie patreon[www.patreon.com],
or make a donation to my paypal (address: arkan_ebi@hotmail.com )

S&S: Service and Supply title was coined by Motta and Ethridge
New Wave expansion title was pitched by Lennard
Brought to thee by Justin N. along with the Simcardo Association:
- Simcardo (himself)
- Brijnvag
- TheGrass
- Vagineer089
- Casper_TFG
- did I miss someone?

Brian Hates Games  [author] Nov 20 @ 5:35pm
There isnt one other than the sack; gasmask on screenshot is from sogpf

RaNgeR Nov 17 @ 9:36am
Awesome mod, always liked these eras. Already working on creating several missions with friends using New Wave. I understand that you do not answer and ignore questions about future plans as you mentioned in the description, and I apologize in advance if that was already asked and answered (or not) but regardless of the 70s-90s era, I am curious about if there are plans on creating separate S&S mod that introduce the US military in the 2000-2010 timeline like your older US Forces 2000s mod? If there will be no reply, I'll just take it as a "no", but hopefully as a "have patience" type of deal. Anyhow, thank you for your work.

Brian Hates Games  [author] Nov 15 @ 8:13am
not that i know of yet, you can maybe use CWR3 mod which has these uniforms included; i did start working on one with FWA weapons but havent managed tto finish itt

Pipey9 Nov 15 @ 7:57am
Is there any Zeus presets for units with these uniforms?

SkellFather Nov 14 @ 5:46pm
Any plans for another episode of S&S moving further into the Earth Timeline?

soldieroftruth Oct 31 @ 9:18pm
Are retextures allowed? Not for the intentions of distributing them publicly, but for personal use.

Brian Hates Games  [author] Sep 14 @ 7:49am
most files and their functions are described in description
< >