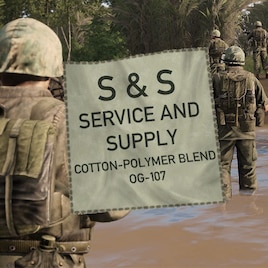 Justin N.
Offline
See all 1121 collections (some may be hidden)

This item has been added to your Subscriptions. Some games will require you to relaunch them before the item will be downloaded.
Description
Sus and Sus
Service and Supply

The Reading of this Rather lenghty text is highly advised
For you bunch of hippies to chew on. utilisable pieces of wearables from the Cold War, primarily 60s-era US military. (and some bonus like the Nederlanders and possibly more to come!)
This addon is composed of 20% cotton, 40% synthetic polymer, 40% Spastic nylon Blend, OG-107

Additionally, Radios in S&S are compatible to TFAR. For ACRE2 compatibility, please use this workshop entity:

Ranked Uniforms
S&S includes a modified version of KP Ranks, which (currently) only works for S&S Uniforms. in an MP game, the host can assign ranks to players via the KP ranks menu which is accessible through the in-game context menu. All credits to Wyqer for the original KP ranks code
Source code : https://github.com/simcardo/KP-Ranks

Full list of items can be seen in our BIS Forum Thread[forums.bohemia.net]

Files
This pack has been configured to be rather modular so that you can remove certain files if you wish to not play with certain things.

If you do enjoy the content, please consider buying Justin a coffee (:[www.buymeacoffee.com] or supporting vie patreon[www.patreon.com],
or make a donation to my paypal (address: arkan_ebi@hotmail.com )

S&S: Service and Supply title was coined by Motta and Ethridge
Brought to thee by Justin N. along with the Simcardo Association:
- Simcardo (himself)
- Brijnvag
- TheGrass
- Vagineer089
- Casper_TFG
- did I miss someone?

Any idea of servers that are running this?
SPC.WHISKEY

Brian Hates Games  [author] Aug 9 @ 4:54am
it was donated to unsung and holster is not intended to work, sidearms from diffrent mods have diffrent positions and they 80% theyll clip thru the holster instead for that reason

Two-I-C Aug 9 @ 4:47am
Nah mate I love your mod, It's one of the best customizing unit mod out there, just wondering why the holster isn't fixed and it has shared asset with unsung

Two-I-C Aug 9 @ 4:20am
Isn't most of the assets the same with unsung, and holster on the vests don't work like unsung's

Brian Hates Games  [author] Jul 17 @ 6:33pm
Its not perfect but i hv no other way i know of to add ranks and i suck at coding so its gonna stay until i find out a better solution

Max Shadow Jul 17 @ 9:43am
Man, KP Ranks is so annoying. Adding the extra options to every mission. It would be better as an optional feature, disabled by default. I ended up disabling this mod for that reason alone. Great mod anyways, but adding something like that to a content mod is a terrible idea.
< >