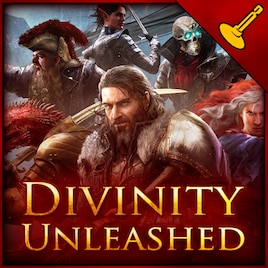 Kalavinka
Offline
See all 4698 collections (some may be hidden)

This item has been added to your Subscriptions. Some games will require you to relaunch them before the item will be downloaded.
Description
One mod to fix every community complaint about the world's greatest RPG, fully compatible with all of your favourite mods! REQUIRES NORBYTE'S SCRIPT EXTENDER[github.com] TO RUN.

Divinity Unleashed keeps the core DOS2 experience everybody loves and polishes its flaws into a solid foundation compatible with nearly any mod you can dream of. This gameplay overhaul bends over backwards to integrate with your favourite class mods, skill expansions and content packs, letting you fully customize your every playthrough.

You can read absolutely everything this mod has to offer in the cleanly formatted mod document[docs.google.com].

Divinity Unleashed works with all of your favourite class and skill mods. No compatibility patch required!

Mods that do not work with this mod:
Load order:
Just be sure to load any mods changing base game skills after this mod, if you want their changes to take priority.

If you want to learn more about the extensive changes Divinity Unleashed has made to the game, you can browse the documentation[docs.google.com] at your leisure. It's an easy read, promise.

Want to discuss the mod and exchange build ideas with our community? Join our Discord server![discord.gg]

If you really do like this mod enough to pop me a coin, my link is here[www.paypal.me]. Alternatively, you can get rewards from my Patreon[www.patreon.com].

Donations aren't necessary, but help me big time. They help me find time to keep making Divinity Unleashed a better mod, and Divinity: Original Sin 2 an even better game.

Do you own the GOG version? No problem! Just use the Nexusmods Link[www.nexusmods.com] to download and play this mod.

Special thanks to Wes Fenlon for featuring Divinity Unleashed in PCGamer Magazine!
Popular Discussions View All (15)

Kalavinka  [author] 10 hours ago
Yeah, it's not possible. Sorry. The script extender was very much needed.

RzRTelhalm 11 hours ago
@Doofenshmirtz Due to the nature of the engine and the changes in the mod present, and my limited knowledge, I'm unsure if that's even viable.

Doofenshmirtz 19 hours ago
Would be nice to have a version that does not require the script extender. With Geforce Now I can only use mods from steam workshop exclusively.

Laast May 16 @ 4:29am
"Existing Save Compatibility: Thinking about trying this, but don't want to start a new game? Go ahead and slap it on an existing save file. This mod won't bite!"

OK but can I remove it from a savegame without breaking everything?

Duke May 9 @ 2:12pm
Did you address poison / Undead at all? My first playthrough I was poison spec and 90% of the enemies are undead. I felt useless.

RzRTelhalm May 1 @ 9:45pm
@berserki Working story error - you didn't install the script extender, or you have incompatible mods.

berserki May 1 @ 9:42pm
Failed to mention the game gives you 4 extra party members from the literal beginning of the game, ruining Lone Wolf runs. Unisntalled.

dan.kolyasnikov Apr 30 @ 12:34pm
When using the skill "first aid" on the character with this skill, the status of "rest" becomes constantly hanging on the character. Is this a bug or a mod thing?

PPPPPedro Apr 15 @ 10:14am
@Spiner909 I have found the game easier with friends playing than playing solo (one player controlling 4 characters) guess you will have to restart again but with a higher difficulty.

Spiner909 Apr 14 @ 11:33pm
My friends and I just finished Act 1 with this mod and we are finding Classic difficulty too easy (steamrolled the Act 1 ending bosses). However you cannot raise the difficulty of a game in progress, only lower it. Anyone have a suggested mod or file tweak to make the game harder?
< >