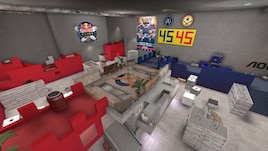 Geli
Offline
See all 72 collections (some may be hidden)

This item has been added to your Subscriptions. Some games will require you to relaunch them before the item will be downloaded.
Description
Red Bull Flick [Castle]
Game Type: 2v2
Game Mode: Red Bull Flick
Objective: Stand on the control point for 60 seconds.

To win the round, a team must stand on the control [...] longer than the other team by the time the round ends.
or
[...] the team who stood on it for less time wins the round.

Knotoriouz May 5, 2020 @ 3:12am
when map loads i get stuck in lobby where i need to select the team flag and i click done but nothing happens after that i am stuck in the waiting lobby for whole time.