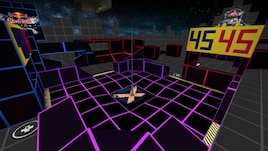 Geli
Offline
See all 48 collections (some may be hidden)

This item has been added to your Subscriptions. Some games will require you to relaunch them before the item will be downloaded.
Description
Red Bull Flick [Matrix]
Game Type: 2v2
Game Mode: Red Bull Flick
Objective: Stand on the control point for 60 seconds.

Red Bull Flick [Matrix] is set in a digital world with an aim-map like layout. Use Teleporters to get to a highground to snipe your opponent.

K0L3N Nov 18 @ 11:55am
There's a problem with the Logo's, the CT side has a big advantage because they are really hard to see in front of the logo. Could you move them up a bit?