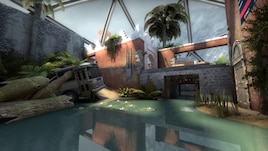 z0ro4rk
Offline
See all 54 collections (some may be hidden)

This item has been added to your Subscriptions. Some games will require you to relaunch them before the item will be downloaded.
Description
Red Bull Flick [Himalaya]
Game Type: 2v2
Game Mode: Red Bull Flick
Objective: Stand on the control point for 60 seconds.

Red Bull Flick [Himalaya] is set in a tropical oasis within the Himalyas. Players start with pistols. A Nova spawns at a special spot.