Store Page
Slay the Spire >  Workshop > Michael Mayhem's Workshop
This item has been removed from the community because it violates Steam Community & Content Guidelines. It is only visible to you. If you believe your item has been removed by mistake, please contact Steam Support.
This item is incompatible with Slay the Spire. Please see the instructions page for reasons why this item might not work within Slay the Spire.
Current visibility: Hidden
This item will only be visible to you, admins, and anyone marked as a creator.
Current visibility: Friends-only
This item will only be visible in searches to you, your friends, and admins. 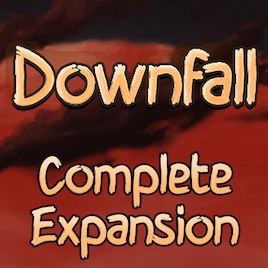 SuperLuigi231
Online
See all 869 collections (some may be hidden)

This item has been added to your Subscriptions. Some games will require you to relaunch them before the item will be downloaded.
Description
https://discord.gg/GFe2Tr4kh9 - Join the official new Downfall Discord community server for all the latest updates, beta builds, and centralized place to post feedback and bugs.

Downfall is a full-featured Expansion for Slay the Spire, including a new campaign, SEVEN new heroes to play, new relics, new cards, new potions, and more.

The Heart demands that this endless cycle of slaughter be finished. Answer the call as a Villain, and see to the defense of the Spire.

Slay the Slayers
Instead of engaging in a Normal Run, you may now play in the brand new Downfall Mode, as one of four new Villain characters, and protect the spire from those who would harm it. This is a separate game mode from the Standard run.

The Slime Boss (formerly known as the Slimebound)
Command a squadron of slime minions to do your bidding as the dapper Slime Boss! Bash enemies head-first with powerful Tackle cards, which damage yourself as well as your foe. Coat your enemies in horrendous Goop and consume it for bonus damage and healing, quickly restoring any Tackle damage that went unblocked.

The Slime Boss is an updated version of the character formerly found in the Slimebound Mod.

The Guardian
As the Guardian, waylay your enemies with powerful multi-hit attacks as you build up your Strength. Brace yourself, and shrug off the blows to enter Defensive Mode, easily deflecting damage and protecting your health while biting back. Collect Gem cards and socket them into other cards, effectively customizing your cards with bonus effects.

The Guardian is an updated version of the character formerly found in the Guardian Mod.

The Hexaghost
Incinerate your enemies with Soulburn, ignite the six ghostflames that surround your character for extra effects, and utilize Ethereal cards like never before.

The Champ
Armed with sword, shield, and insulting wits, use his many fighting stances and techniques to your advantage, including Combos and devastating Finishers.

The Automaton
The Automaton brings an entirely new mechanic to Downfall. As the Automaton, program Functions - custom-made cards you craft each battle. But, beware of adding too many bugs to your program!

The Gremlins
Not one, but FIVE characters in one! Play the entire Gremlin Gang, who each have their own themes and mechanics to build around.

Formerly HypoSoc's Gremlins Mod, this has been updated and modernized and integrated as a new Downfall villain.

The Snecko (formerly “Playable Snecko” Mod)
The final character of the Downfall villains package. Utilize Unknown cards, which will randomly be rerolled as new cards of other characters. Synergize with these off-class cards, manipulate their costs, and gain control over RNG itself.

“Expansion” content additions to Standard Mode
Like all characters, the Villains each add a few new Relics to the base game pool. If desired, these can be disabled for Standard Mode via the Config menu.

New potions, each themed around one of the Villains, is added to the potion pool. If desired, these can be disabled for Standard Mode via the Config menu.

A new suite of 'Boss' type cards have been added, themed around the Bosses of the Spire. These are generally high-cost, potent cards, and can be purchased at the Merchant, sometimes replacing Colorless cards. If desired, these can be disabled for Standard Mode via the Config menu.

New global Events available to all characters have been added. If desired, these can be disabled for Standard Mode via the Config menu.

New global Curses have been added to the pool. If desired, these can be disabled for Standard Mode via the Config menu.

New Daily Modifiers have been added.

All Villain characters can be enabled via the Config Menu to be playable in Standard Mode. You will still fight their normal counterparts as bosses.

Reskin Content
Downfall adds a new reward after the first time you win a run with a given character: an alternate skin!

Alternate skins come with animated character selection screens, and can be chosen for all future runs. Skin change only affects the appearance of the character - no gameplay alterations occur when changing skins.

This includes the Guardian costume from the mod formerly known as “Guardian-chan”, and all skins are provided by the same artist - Rita-B.

Automaton does not have alternate skins at this time, but will be added later.

Bug: Game crashes when trying to start as Snecko
TwoFaceTony

Violen Vaymire 12 hours ago
@Bastard Neko (Far as i'm aware) progression is halted when you are playing with mods.
A work around. (Copy paste from dev post):

"STSPlayer in your preferences folder in the game directory (betaPreferences if on beta branch).

It can be opened with any text editor.

And there, the final act should be available.
Keep in mind this file is in JSON format so if the final line has a comma, the file won't load correctly (crash on start)."

I made some slight grammar edit's to make the dev's post more readable.
Also pick up the 'Achievements Enabler' if you haven't already. Hope this helps :)

Bastard Neko Jun 29 @ 6:46am
No matter how many times I've beaten a run as one of the characters with a reskin, it doesn't unlock it. Do I have to beat a certain ascension or Neow?

GhostGlitch Jun 25 @ 7:37pm
@Netsuko The hermit mod is included in downfall. you should not have both installed.

Netsuko Jun 23 @ 12:05am
bug: I have The Hermit mod, and whenever he appears as the Act boss in downfall mode the game instantly crashes. I've lost multiple runs because of this

ElBacha Jun 19 @ 4:46am
Do not for the life of you use roundhouse kick in the guardian fight before the big attack. For some reason it forgets it needs to curl and then screws up the whole attack pattern. Makes it extremely challenging if you are into that

Hearts™ Jun 11 @ 4:29am
the Guardian crashes the game when I start a run, as soon as the first battle starts. (It loads in, but then as soon as I start drawing cards, it crashes).

prosnit Jun 6 @ 4:47am
Playing the Guardian the first time on this mod, the game crashed when I met the Gremlins at the mine (third round of combat). When I reload the autosave, it crashes at the same place.

Please fix it (so far, the mod is amazing.)

Calvinbah May 23 @ 4:10pm
I recently loaded up the game and I can only see to do the Downfall campaign. Even when selecting Normal run, it's the Heart that gives my initial boon, not the whale.
< >