Store Page
Total War: WARHAMMER II>  Workshop > Drunk Flamingo's Workshop
This item has been removed from the community because it violates Steam Community & Content Guidelines. It is only visible to you. If you believe your item has been removed by mistake, please contact Steam Support.
This item is incompatible with Total War: WARHAMMER II. Please see the instructions page for reasons why this item might not work within Total War: WARHAMMER II.
Current visibility: Hidden
This item will only be visible to you, admins, and anyone marked as a creator.
Current visibility: Friends-only
This item will only be visible in searches to you, your friends, and admins. 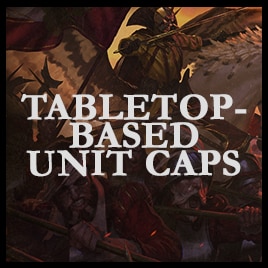 This item has been added to your Subscriptions. Some games will require you to relaunch them before the item will be downloaded.
In 1 collection by Drunk Flamingo
The Warhammer Expanded Collection

22 items
Description
This mod's description keeps being deleted by steam, so if it isn't here occasionally, that is why.

This mod adds a unit capping system to the game implemented in Lua script.

All units in the game are assigned a category (which are for the most part pulled directly from the tabletop rules) and a point cost from 1 to 3. These costs display as a clear indicator on the recruitment panel. (Note: units from other mods will have to add their units via the mod's API. Many popular mods such as Cataph's do this, and if you are interested in adding your Mod's units, then I recommend seeing his Sea Patrol mod for a template).

All armies can recruit up to 5 points of Rare Units and up to 10 points of Special Units. Core Units are unlimited.

The mod will actually limit you in the sense that it will prevent you from recruiting by locking recruitment options when your army is full. Other mods do things like impose penalties on the player when they break the rules, but this mod will just stop you from breaking them in the first place, and there are no gameplay impacts beyond changing what units you are allowed to recruit (ie: no changes to recruitment cost, upkeep, army movement, or anything else).

This applies to the AI as well as the player.

Overhauls such as CTT (for which this mod was designed) and SFO overwrite the costs and groups of the vanilla units to better suit the balance of those overhauls. The default groups are balanced by PrussianWarfare and designed for Vanilla.

Certain characters can have special rules to give them exceptions from certain caps. For instance, Lord Skrolk's special rule from Tabletop is preserved, and he can bring Plague Monks as a Core choice rather than a Special one.

Yes, this does make the game marginally harder because it turns out that when you cannot recruit armies consisting of 6 demigryphs, 8 greatswords and 4 steam tanks, the AI puts up more of a fight. It also removes those annoying cases where the AI decides that 18 Necrophex collosi is one too few. Overall it forces both the player and the AI to use more balanced army compositions, and acts as a very soft cap on total spending in one army.

Outside of mods which do not add custom units to the system (these will not cause issues, they will just treat any unrecognized unit as a Core choice), this mod is fully compatible with basically anything. This mod is implemented in pure script and contains no data tables of any kind.

You also have a broken script mod which is either incompatible or outdated; or a botched download. If you think its steam's fault because you are sure your mod setup is fine, try using Keadrin's Mod Manager (google it).


For Learners:
Source code can be found here: https://github.com/DrunkFlamingo/RecruitmentManager
Popular Discussions View All (10)

PINNED: Twisted and the Twilight Holdover Packfile (Until DrunkFlamingo gets time to update)
PrussianWarfare

Yeah, it looks like reloading - or sometimes simply having a few turns pass by - will reset the slots properly.

Renegade Jan 18 @ 1:33am
There's a few glitches that can occur involves the loss or transfer of units. Saving and reloading will reset the rare/special points to the correct values.

Lampros Jan 16 @ 11:13am
It seems like there is a bug where if you lose a Special or Rare unit, then you cannot get that unit's points slot refunded? For instance, I just lost a Hammerer, and yet there is no Special slot available to recruit another Hammerer.

Talsimov Jan 12 @ 11:44pm
Awww yeaaah! No more silly doomstacks! Time to pay those vampirates a visit, no 15 necrofex colossi army is gonna save them now.