Store Page
Source Filmmaker>  Workshop > Maxxy's Workshop
This item has been removed from the community because it violates Steam Community & Content Guidelines. It is only visible to you. If you believe your item has been removed by mistake, please contact Steam Support.
This item is incompatible with Source Filmmaker. Please see the instructions page for reasons why this item might not work within Source Filmmaker.
Current visibility: Hidden
This item will only be visible to you, admins, and anyone marked as a creator.
Current visibility: Friends-only
This item will only be visible in searches to you, your friends, and admins. 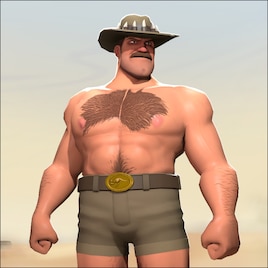 jdbeatz
Online
See all 256 collections (some may be hidden)

This item has been added to your Subscriptions. Some games will require you to relaunch them before the item will be downloaded.
Description
Saxton Hale is a daring Australian, President and CEO of Mann Co., and the star of many comics series.
Saxton Hale appears in the Jungle Inferno update with his own unique model.

This is not Valve's original Saxton Hale model, It's an imitation.

FAQ:
- "The model is not working, textures are missing, what can I do?"
- Download the legacy addon from here.[dl.dropboxusercontent.com] Install it to your game folder (usermod).
- "I'm a server owner and I run VSH on my server. Can I use this model?"
- A VSH version is available for free to everyone, here![dl.dropboxusercontent.com]
- "Why can't we have the original model?"
- The original model is not yet released. I messaged the SFM team about it and I haven't received a reply.
- "Will you guys release more character models in the future?"
- Yes. However there is no approximate release date for any of the potential models.

Note from Maxxy:
Before Jungle Inferno was released JPRAS already worked on a Saxton Hale model which was used in the Mayann short video.
I was planning on helping the release of the model, but not long after I started Valve revealed Saxton Hale in the Jungle Inferno short on October 20. The idea after that was to create an imitation of the model.

Before starting I've sent a mail to the Source Filmmaker team, asking if we could have the official model released by any chance, if not, would it interfere with a potential re-creation? Since I received no reply, I started working on the model based on the video.

All sorts of camera angles / changes were taken into consideration before I ended up with the current look. I think it generally captures the characteristics of Saxton Hale very much, same goes to the wildly expressive HWM face which I created with DMXEdit. It was a really fun process, but I was hoping to get a reply from the SFM team which could have anwsered some of my questions regarding custom assets created for their short films. ( It was promised that SFM gets more guides from Valve / Meet the Team sessions / Assets )

Please in this case if the team reads my note, send me a mail at: maxxywarrior@gmail.com,
I would gladly discuss this matter further here and in the name of content creators.
I hope Saxton is going to help and inspire content creators for the upcoming Saxxy Awards 2017, good luck and enjoy the model!

Click here to view an album of work in progress pictures![imgur.com]

Yogneir Oct 25, 2019 @ 1:58pm
The reason the SFM team never responded is because they probably don't exist or work on other projects often.
< >