Store Page
Team Fortress 2>  Workshop > Yrrzy's Workshop
This item has been removed from the community because it violates Steam Community & Content Guidelines. It is only visible to you. If you believe your item has been removed by mistake, please contact Steam Support.
This item is incompatible with Team Fortress 2. Please see the instructions page for reasons why this item might not work within Team Fortress 2.
Current visibility: Hidden
This item will only be visible to you, admins, and anyone marked as a creator.
Current visibility: Friends-only
This item will only be visible in searches to you, your friends, and admins. 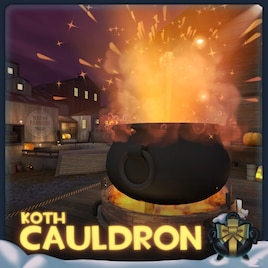 Exactol
Offline
See all 57 collections (some may be hidden)

This item has been added to your Subscriptions. Some games will require you to relaunch them before the item will be downloaded.
Description
A Witch's Cauldron sits at the centre of this King of the Hill map, dripping with magic.
Capture the point to invoke one of 4 magical effects:
- Summon Skeletons!
- Open Portals!
- Supercharge Weapons!
- Launch Fireballs!

This is a Halloween adaptation of my map, Bagel, with changes made all over to make it more enjoyable for halloween fun!

Special Thanks:
TF2Maps.net for feedback and help.
UEAKCrash for helping me get more testing.
ABP for helping me make sure the lightning didn't cause problems with epilepsy. 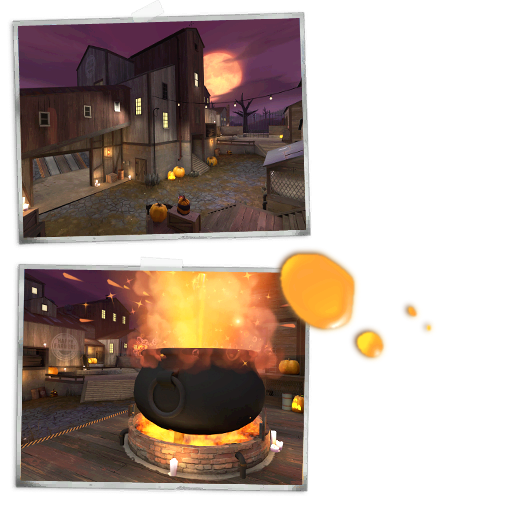 UEAKCrash  [author] Mar 5, 2019 @ 7:52am
(Psst I only made the underworld in this one, the rest of the map and the wackiness was made by the very talented yrrzy. Thank you, though.)

dylansang Mar 4, 2019 @ 1:40pm
This map is AMAZING. I first played this map on a community 102% crits server, and I played this map before I knew about the original map, Bagel. This map's concept is very interesting as when you capture the point, some magic happens. Crash, your maps are very awesome, and your maps are very wacky. It's still good to see this fun and silly map in the game.

Greg Oct 26, 2018 @ 11:23am
defiently would like to see the regular one in the game too, the map plays really well and is kind of unique in a way, the really open control point (or hill) is a great concept and works well too. Shame it will be gone when the halloween event ends on november 14th. :(

Sir Metaladon Oct 24, 2018 @ 11:34am
I was blown away when I played this. Not because of the gimmicks, or the aesthetics, but the LAYOUT. It's fantastic! It feels like you're NEVER fighting an uphill battle, EVER! If the enemy takes the point, they have a hard time defending the side routes, making the point easy to retake. If you're defending, every area breaks line of sight quickly and allows you to obtain a health kit and get back into the fight ASAP. No absurd sentry spots, no camping, no shutdown sniper sightlines, no obstacles! It's just a joy to charge in and have at the fight at hand, with little to nothing preventing it! And somehow at the same time, it's not dominated by scouts, or minies, or any of the usual scourges of "open" maps...

Sir Metaladon Oct 24, 2018 @ 11:34am
I think the brilliance of it is the fact that everything is just far enough apart. Soldiers, Demos, and Heavies aren't pushed to thier range limits during a fight, and Scouts, Pyros, and Spies have very easy-to-access but hard to defend flanks that allow them to permeate the battlefield. Maybe I just got 10 good matches in a row, but really, this was an invigorating KotH to make it into the game..... In fact, since I love studying the workings of "whats makes a TF2 map layout good", do you mind if I add you?