Store Page
Age of Empires II (2013)>  Workshop > bassi's Workshop
This item has been removed from the community because it violates Steam Community & Content Guidelines. It is only visible to you. If you believe your item has been removed by mistake, please contact Steam Support.
This item is incompatible with Age of Empires II (2013). Please see the instructions page for reasons why this item might not work within Age of Empires II (2013).
Current visibility: Hidden
This item will only be visible to you, admins, and anyone marked as a creator.
Current visibility: Friends-only
This item will only be visible in searches to you, your friends, and admins. 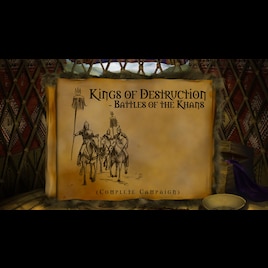 Age of Empires II (2013): The African Kingdoms
Created by

bassi
Offline
See all 42 collections (some may be hidden)
You need DLC to use this item.

This item has been added to your Subscriptions. Some games will require you to relaunch them before the item will be downloaded.
Description
Kings of Destruction
Battles of the Khans
- Complete Campaign -

Kings of Destruction is a five-scenario campaign about several important Khans, which played central roles in the Mongolian expansion. All five scenarios of the series are included in this campaign. Subscribe and lead the horde to glory!

NOTE: To play this campaign you need the Add-Ons The Forgotten and The African Kingdoms.

NOTE ALSO: This campaign is intended for experienced players! Unskilled players could easily be overwhelmed.

30. Mar. 2017: Fixed one critical bug in scenario 5, which made some players not win, although all objectives were fulfilled.
< >
129 Comments

bassi  [author] Mar 10 @ 10:23am
@Anthrakhnosis: Thanks! I designed several campaigns for Age of Empires II DE.

Anthrakhnosis Mar 10 @ 9:52am
did you made any official campaigns for HD and DE? you're pretty creative and good designer

Creeping Goat Nov 16, 2019 @ 7:22pm
Just finished your new one @bassi. It was excellently made and very fun. I played on standard difficulty because lolnoob but i never found it too difficult. There was a good amount of pressure from the enemies but nothing that couldnt be handled. I also liked the first part of mission 1, very nice addition.

Creeping Goat Nov 16, 2019 @ 6:45am
God bless you bassi for gifting us these lovely campaigns. You never disappoint.

bassi  [author] Nov 16, 2019 @ 4:00am
For all of you who cannot get enough of Mongol themed campaigns:
I have just released the very first custom campaign for AoE II DE:

DoomedPaul772 Nov 12, 2019 @ 4:03pm
They are both very strong, also while you still have to do most of the work, yellow is somewhat more helpful if you do their quests early.

DoomedPaul772 Nov 12, 2019 @ 4:02pm
@[8thAL.G][Pvt]Ziu: I remember that one being especially hard. You always have to kite attacking troops to your castle. It took me hours, but I eventually built up to beat the White Horde, Timur and the Blue Horde in that order.
< >