Store Page
Stellaris>  Workshop > Elratie's Workshop
This item has been removed from the community because it violates Steam Community & Content Guidelines. It is only visible to you. If you believe your item has been removed by mistake, please contact Steam Support.
This item is incompatible with Stellaris. Please see the instructions page for reasons why this item might not work within Stellaris.
Current visibility: Hidden
This item will only be visible to you, admins, and anyone marked as a creator.
Current visibility: Friends-only
This item will only be visible in searches to you, your friends, and admins. 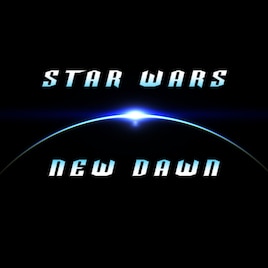 This item has been added to your Subscriptions. Some games will require you to relaunch them before the item will be downloaded.
In 1 collection by Elratie
Elra´s Star Wars Mods

Star Wars: New Dawn is a total conversion mod based on Fallen Republic. New Dawn offers a different approach to gameplay and pace. Before you ask, yes I am allowed to do that, I have an Agreement with the SWFR Team, since I was a core Member of it.

Jedipony1 15 hours ago
How do I build ships??

malthric Oct 21 @ 12:39pm
what about a mod with just the ships of this mod because your ships are the best and the space stations are unique to each factions

Elratie  [author] Oct 21 @ 9:59am
@Kusiami thank you ^^ the next update should improve it alot further

Woodyjr96 Oct 18 @ 3:25pm
Started this up first time and noticed I can't create my own faction which is a shame as I wanted to play as lore faction thats not in the game.

Elratie  [author] Oct 13 @ 1:59am
@Dreamyr in the next update he will be a bit weaker 2k-3k torps are bit too much otherwise use a mix of every ship type you have with a good amount of fighters/ bombers

Dreamyr Oct 12 @ 5:13pm
The hell did you do to Nihlus. He chews through 50k worth of fleet power like it's not even there.