Store Page
Stellaris>  Workshop > RevansSchatten's Workshop
This item has been removed from the community because it violates Steam Community & Content Guidelines. It is only visible to you. If you believe your item has been removed by mistake, please contact Steam Support.
This item is incompatible with Stellaris. Please see the instructions page for reasons why this item might not work within Stellaris.
Current visibility: Hidden
This item will only be visible to you, admins, and anyone marked as a creator.
Current visibility: Friends-only
This item will only be visible in searches to you, your friends, and admins. 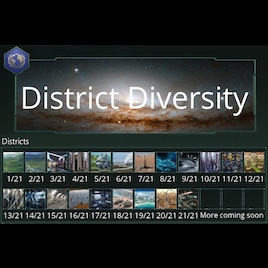 This item has been added to your Subscriptions. Some games will require you to relaunch them before the item will be downloaded.
In 1 collection by RevansSchatten
Diverse Galaxy

I just uploaded a huge update, as it will not work with your savegames it is a seperate mod. Make sure to subscribe to DistrictOverhaul, as it will recive future updates.
Have you ever thought that nearly every planet is the same (except some special ones), well this mod will change your gameplay of Stellaris forever.
Each planet now has a total of 5 - 6 districts. These new districts are a unique combination new districts, some uncapped, some with their own planetary deposits.

This mod has been build around Planetary Diversity and The Belt (V2.2) so all their planets have custom districts as well.

Some players have a problem with capped district, if this is the case install this compatibility patch.

For this mod to work, you need one of these UI mods:
Mod features:
Planned upcoming features:

other mods that are compatible (but don't add new planet classes):
State of Lies

In case you use Glavius's Ultimate AI use this compatibility patch.

If you don't want to use Planetary Diversity use this compatibility patch.

If you have any mods that add new planets and you would like new districts for. Just simply send me a message.
In case you find any incompatibilitys please report them in the discussion section.

All in all, any mod, that doesn't add planets with special districts should be compatible.

Deathcoaster Jul 15, 2019 @ 7:33pm
OK so no more this mod, use District Overhaul? Thanks man just wondering and want to make sure my games are awesome

RevansSchatten  [author] Jun 20, 2019 @ 9:14am
District Diversity has been overhauled to DistrictOverhaul

Jackwagon Jun 5, 2019 @ 4:26am
Most complex mods aren't going to be compatible. Plus, this mod is essentially legacy- read the very first line up top ;)