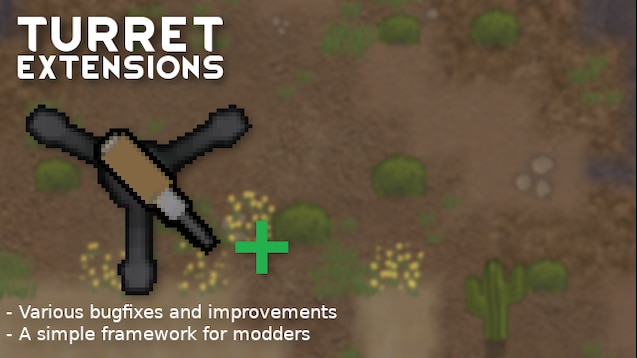 This item has been added to your Subscriptions. Some games will require you to relaunch them before the item will be downloaded.
In 1 collection by XeoNovaDan
XND's RimWorld Mods

Netrve's fork also has an optimised 1.1 version of this mod which doesn't suffer from the performance issues this release suffers from, and is even compatible with 1.0

Overview
Turret Extensions is a multi-purpose mod that does the following:

An example of a mod that uses a significant chunk of this mod's framework is TE Turret Expansion, which you can find in the Links section.

All of the above can now be done purely in XML; not a single line of C# is required! There is comprehensive documentation in the Links section for how to use this framework in your mods.

If you want to spice up your mod's thumbnail a bit, you can download a 'Powered by Turret Extensions' overlay image from Dropbox here[www.dropbox.com] - with and without drop shadows.
Preview:

If you have any suggestions or other constructive feedback, feel free to let me know!

Drgn! Netrve Aug 17 @ 9:29pm
You can find my fork of TE (approved by XND), which includes performance fixes for the issues mention by Kayedon and Fellow Feeling, as well as continued support here: https://steamcommunity.com/sharedfiles/filedetails/?id=2201064941

a Aug 15 @ 7:20pm
I'd like to echo what Kayedon just said - I just gave up on this mod because it was causing 2000ms spikes every 5-10 seconds. It makes the game completely unplayable and that breaks my heart because it's one of my favourite mods.

Kayedon Aug 15 @ 7:10pm
If you ever return to this mod, I'd like to report a bit of an issue. Per Dubs Performance Analyzer, ConstructDeliverResourcesToTurrets - Construction is over 10 times more resource intensive than any non-mod job, despite being low on the priority list and me not currently constructing any turrets. The second most intensive job is DeliverResourcesToTurrets, also linked to your mod, just shy of 10 times more resource intensive than any other job.

pgames-food Jul 22 @ 10:18pm
ah ok, hopefully xeonovadan can have a look when they get a moment.
btw cool, i missed simple turrets, just subscribed from seeing the error page :)

NECEROS Jul 22 @ 2:01pm
I've narrowed it down to Turret Extensions for sure. With nothing but necessary mods, even the mini-turret couldn't be upgraded (I am including TE Turret Expansion). It complains about the job driver and toil already being reserved.

pgames-food Jul 20 @ 5:30pm
hi neceros, i tried out the mod, with a few other turret mods too, and it let me upgrade a usual vanilla minigun turret, and even a balista arrow turret.

(i cheated in some materials/power etc) and unlocked all research, but it did upgrade (just gave a few repeatable error popups in debug, until it actually started upgrading it)
i'll send you 4 screens :)
< >