Store Page
Portal 2>  Workshop > Demon Arisen's Workshop
This item has been removed from the community because it violates Steam Community & Content Guidelines. It is only visible to you. If you believe your item has been removed by mistake, please contact Steam Support.
This item is incompatible with Portal 2. Please see the instructions page for reasons why this item might not work within Portal 2.
Current visibility: Hidden
This item will only be visible to you, admins, and anyone marked as a creator.
Current visibility: Friends-only
This item will only be visible in searches to you, your friends, and admins. 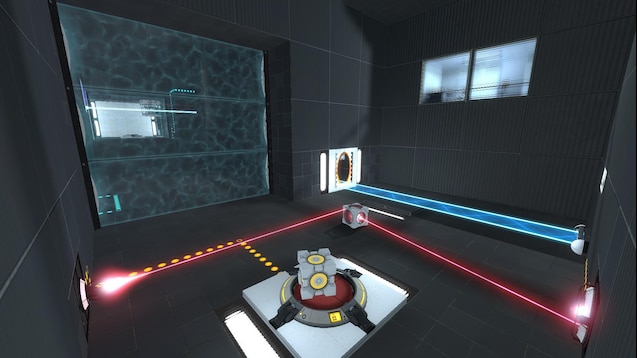 This item has been added to your Subscriptions. Some games will require you to relaunch them before the item will be downloaded.
In 3 collections by Demon Arisen
Demon Arisen's Logic Puzzles

4 items
Description
Ladies and Gentlemen, my name is Cave Johnson, founder and CEO of Aperture Science, and I am proud to present to you Aperture's latest innovation in quantum tunnelling: the Aperture Science Handheld Mono-Portal Device, or Monoportal Gun for short. Why is it called the Monoportal Gun, you ask? Well, mono means one and portal means portal. That's right, you get one portal for the price of two! What? No, the portal gun program isn't undergoing budget cuts, and we're not trying to scam you, unlike last time... Alright, and the time before... and... all those other times...

Point is, this isn't being done for budgetary reasons… well, not just for budgetary reasons - the monoportal gun is a genuinely innovative piece of technology allowing you to portal like you've never portaled before: less frequently! You also only have one trigger to pull instead of two, so it saves you energy and saves us money! I mean... saves us Monet, the painter, because... the Monoportal Gun... lets you travel back in time! Albeit only very rarely and not by deliberate design and there’s no way to get back.

Regardless, investors, here at Aperture we truly believe that the Monoportal Gun is worth your money, your time, your money, and most importantly, your money. Oh, and before you ask, no we did not only decide to invent the Monoportal Gun due to the fact that the Research and Development department stole all of our orange portal dye to use in their experimental radioactive spray tan. It was actually the cafeteria who stole it all for use as food colouring in their experimental radioactive orange juice. Cave Johnson, still not bankrupt, we’re done here.

Anodyne is a pair of monoportal puzzles focusing on cube management, light bridges, and lasers. They’re fairly simple and run-of-the-mill, hence the title “Anodyne”, which means inoffensive and ordinary – but I hope you enjoy them anyway.

That’s right everyone, it’s my first Monoportal Chamber! If you don’t know, a Monoportal chamber is a test in which you have control of only one of your portals, and the other portal is in a fixed position, providing a different kind of challenge and forcing you to think with portals in a different way. I think it’s pretty good considering it’s my first monoportal puzzle, which, as a wise young man named quaternary once said, is “like mapping for a whole different game”. Please do let me know your thoughts.

This test was originally much more difficult, but after spending a week trying to get the solution to work, I decided to remove some of the clever ideas to make the puzzle more streamlined and fun, which for me is always the priority. The second puzzle used to have six cubes (!) and about a dozen fizzlers (!!) but now it has far fewer, and I feel like it’s an easier – but ultimately better – puzzle for it. As always, if you have any feedback, questions, or insults, leave them in the comments below, and I’ll get back to you. :)

NOTE: I used Atlas' player model because I thought the blue stripes on the portal gun were a good visual indicator that you only had control of the blue portal. Plus, you know, just for fun. :P
< >
107 Comments

Demon Arisen  [author] Jul 5, 2020 @ 9:43am
@jeffrey epstein Thanks man, much appreciated! I'd echo that sentiment myself, in fact I usually prefer well-designed simple puzzles to sprawling, complex ones.

jeffrey epstein Jul 2, 2020 @ 9:34am
Very nice reusage of the cubes and manipulation of the direction of the cubes for the laser! Some may believe that simple puzzles aren't necessarily worth doing, but simplicity doesn't automatically imply idiocy, as shown through the design. Nice chamber.

Hikari Jun 2, 2019 @ 5:42pm
Oh my gosh, pressing the button to switch between lightbridge and laser was freaking GENIUS!

Dark Rozen Apr 11, 2019 @ 7:24am
Nice map. Very good use of the cube respawns . You could actually make it slightly harder by adding goo in the lightbridge area.
< >