Store Page
Total War: WARHAMMER >  Workshop > Crynsos's Workshop
This item has been removed from the community because it violates Steam Community & Content Guidelines. It is only visible to you. If you believe your item has been removed by mistake, please contact Steam Support.
This item is incompatible with Total War: WARHAMMER. Please see the instructions page for reasons why this item might not work within Total War: WARHAMMER.
Current visibility: Hidden
This item will only be visible to you, admins, and anyone marked as a creator.
Current visibility: Friends-only
This item will only be visible in searches to you, your friends, and admins. 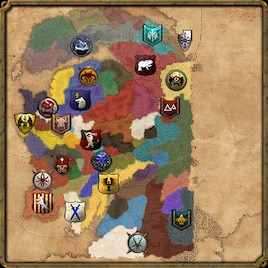 Crynsos
Offline
See all 1610 collections (some may be hidden)

For a simpler version of this mod look at my Faction Unlocker Basic.

Pre-Norsca save games will not work with this version, use this one instead!

You WILL require at least one of the mods from this collection to properly use this one, depending on which factions you want to play in Single Player. For Multiplayer, all factions will be available no matter which one you pick.
Want to customize the available Factions? Here's how to!

About this Mod
This mod aims to create a Vanilla Enhanced experience, with a focus on campaign level improvements that should not conflict with classic Overhauls like Steel Faith or Radious. To maximize the game's replayability, it unlocks all factions available in the game and adds a few missing ones.

It also combines the functionality of some other mods which improved specific aspects of the campaign, but were incompatible with each other.

The final major advantage that this mod provides is to be a platform to enable other modders to create fully customized Legendary Lords out of the vanilla Faction Leaders and also customize Settlements as much as possible, which many modders are using to create new types of mods.

I will continue to improve this project and try to break the limits of what modders can do as much as possible, so if you want to be a part of this project, then feel free to enjoy what I managed to create so far and please report all bugs you may find!

Compatibility
This mod won't work alongside other mods that need to modify startpos.esf to work as intended.
These are mainly mods that modify information about how the campaign map is populated with settlements, lords, armies and so on at the start of a campaign.


Donations
Want to support my mods? Then you can donate via Patreon or PayPal! (thecrynsos@gmail.com)

deathgivercola Dec 28, 2022 @ 3:34pm
can anyone get this to work currently? I was able to get this mod to work a few months ago, but it seems like it doesnt work anymore

Wardlaw Oct 19, 2022 @ 9:20pm
Hi there, when I play as norse dwarves (karaka drak) I cannot recruit generals the box that has the name and type in the bottom just has this (%PLACEHOLDER%(UNUSED) and is grayed out. Any possible fix please?

Gullskaffer Jul 6, 2020 @ 7:10pm
@Nightmare799 & Mordred that's a good solution but annoying. I figured out where the continue button was by hitting back, then to start the campaign, I realized there's a small click-box in between the two faction cards in the UI where you interact with and click the continue button, although I think there's too many factions to display them all at the same time anyway so you may not be able to have them all active all at once

WarDemon May 31, 2020 @ 1:54pm
If i play as bastonne i cant put my knights in lance formation? is it because of the mod or did CA change the brets to not have lance anymore?