Store Page
Dota 2 >  Workshop > perhaps your dad's Workshop
This item has been removed from the community because it violates Steam Community & Content Guidelines. It is only visible to you. If you believe your item has been removed by mistake, please contact Steam Support.
This item is incompatible with Dota 2. Please see the instructions page for reasons why this item might not work within Dota 2.
Current visibility: Hidden
This item will only be visible to you, admins, and anyone marked as a creator.
Current visibility: Friends-only
This item will only be visible in searches to you, your friends, and admins. 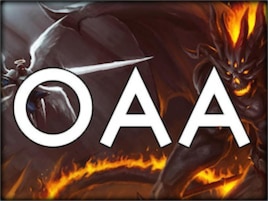 Trildar
Offline
See all 15 collections (some may be hidden)

This item has been added to your Subscriptions. Some games will require you to relaunch them before the item will be downloaded.
Description
Join the Community Discord[discord.com] to find other good players, or to report bugs or make suggestions!

Open Angel Arena is run as an open source project. There's lots of cool stuff we have designed, if you'd like to help create them check out our GitHub[github.com]. We are always looking for new people to help with the game!
Popular Discussions View All (6)

TheManNicco Sep 10, 2020 @ 9:59am
abusable bugs toxic community. toxic developers.developers dont listen at all regarding bugs. fix it yourself then if its such a big issue is the response. not recomended plus its dead so u wont find a game

Ender Dec 26, 2019 @ 4:00pm
Bug report: I played a game with my friends last night and none of us were allowed to upgrade our abilities past 4th level (3rd for ultimate). Idk why