Store Page
Starbound>  Workshop > Aegonian [THEA]'s Workshop
This item has been removed from the community because it violates Steam Community & Content Guidelines. It is only visible to you. If you believe your item has been removed by mistake, please contact Steam Support.
This item is incompatible with Starbound. Please see the instructions page for reasons why this item might not work within Starbound.
Current visibility: Hidden
This item will only be visible to you, admins, and anyone marked as a creator.
Current visibility: Friends-only
This item will only be visible in searches to you, your friends, and admins. 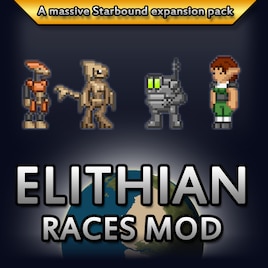 Aegonian [THEA]
Offline
See all 41554 collections (some may be hidden)

This item has been added to your Subscriptions. Some games will require you to relaunch them before the item will be downloaded.
Description
DISCLAIMER: Back up your save files before installing. Characters and other save data, including ships and worlds, may be lost if the mod is uninstalled, so always keep a back-up!

NOTICE: This mod requires a Character Creator extender in order to play as one of the new races. Other content is still available without an extender.

The Elithian Races Mod is a massive expansion for Starbound which adds four new playable races along with hundreds of new items, objects, weapons, armour pieces and much more! All races have their own crafting progression, unique weapons and tiered armour, randomly generated settlements and anything else you'd expect from a new Starbound race. Quality is extremely important to me, and so the mod is incredibly polished, and everything you find in this mod will feel like a natural part of the game.

This mod aims to provide new content for every type of player - even if you don't like playing as custom races, you'll get a lot of value out of this mod! All decorative objects, weapons, vehicles, quests etc. are available to players of all races! The mod also includes dozens of collectable Unique Weapons, each of which has its own unique traits and abilities to spice up your gun- and swordplay. Explore new locations and visit two new outposts filled with quests, merchants and hidden secrets!

The four new playable races added by this mod are: Elithian Races adds multiple new outposts for you to explore! These locations are filled with quests, merchants and hidden secrets for you to find, and act as the central hubs for much of the mod's content: Besides the new playable races, the mod adds a massive amount of new content to the game, all of which you can enjoy even when not playing as one of the Elithian races. Here's a small selection of the vast amount of content available:

-Hundreds of new, racially-themed decorative objects
-New crafting tables, and dozens of new crafting materials for all races
-Dozens of new weapons, and multiple new weapon archetypes for you to find and craft
-Dozens of racially-themed armour sets, both functional and decorative
-Settlements and random encounters for all races, filled with lively NPCs
-A new outpost, the Starfarer's Refuge, complete with merchants, services and quests
-Codex entries on the lore behind the various races, including a make-over of the Codex menu
-Ancient ruins left behind by a powerful race that has long since vanished from the universe
-Several new monsters to fight, capture and collect
-New crops to harvest, and food items to prepare
-A new rarity for items and equipment, Unique, for items of an even higher quality than Legendary
-Unique Weapons with firing modes and other characteristics which set them apart from anything you can find in the base game
-Unique SAIL sprites for each of the races
-Custom respawn animations for all races
-New vehicles for you to obtain, including hoverbikes and a mount
-A new sub-biome for desert planets, including a new quicksand liquid and unique monsters
-Custom crewmembers for you to recruit

And much, much more besides! You can find the answers to the most commonly asked questions in the dedicated FAQ Discussion. If you have a question about the mod, please have a look at this list before asking! If the list does not cover your question, feel free to leave a comment and I will try to answer as soon as I am able!

Additionally, you can check out Sigma 42's excellent unofficial guide on getting started with the Elithian Races Mod.

If you'd like to see some of the mod's content in action, be sure to check out Gaming by Gaslight's excellent playthrough series:

Want to support the mod? I have a Patreon page for those who wish to support the mod with a small monthly donation, which also comes with a few nice rewards! This is completely optional, of course: your subscription to the mod is quite enough for me!

If you do wish to support me on Patreon, you can find my page here[www.patreon.com].
Popular Discussions View All (218)

Crashing when teleporting to creon Embassy after recent update
123

ThAT1gUY Nov 28 @ 8:35am
We don't need to be toxic here, the conversation is already over, please don't continue an argument that you weren't part of.

DaBestBoom Nov 27 @ 9:56pm
Avali are trash anyways, this mod actually does something, and the mod author is very talented

RealJakeSpacePirate Nov 26 @ 12:10pm
I am sorry for being mean. Honestly. I'm so tired of stupid rivalries. Im sorry for perpetuating them.

the little dragon (kgergo 12) Nov 26 @ 12:02am
@FallenDenica not really. There will only be pieces of racial clothing you will be missing out on, and nothing more. The minibiome it adds can generate even with the overwhelming amout on biomes and minibiomes that FU puts into the game, you just need to find a few deserts at least. The dungeons and villages also spawn without problem and any other enconter will also spawn without real problem. I am pretty sure since I do have both mods installed already and find plenty of elithian related stuff.

FallenDenica Nov 25 @ 11:07pm
I play with FU, and now want this mod, i need create new character if i install this?

RealJakeSpacePirate Nov 24 @ 2:48pm
I was not even talking to you.