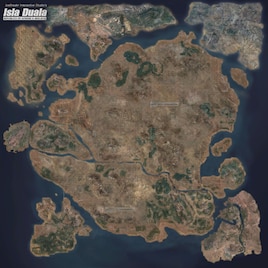 IceBreakr
Online
See all 4929 collections (some may be hidden)

This item has been added to your Subscriptions. Some games will require you to relaunch them before the item will be downloaded.
Description
Isla Duala: one of the most played islands since Arma2 release.
Version: 3.9.5 [Feb 15, 2019]

El Diablo, IceBreakr and Tourist Board of Afrene are inviting you to visit a paradise on Earth - Isla Duala. Tropical forests, sandy beaches, wild savannah, clear water and... nasty neighbouring Republic of Molatia threatening to overrun friendly Republic Afrene in Southern part of Duala. Current peace can be very decieving. Marks of previous decade-long war can be seen even today and no-man zone still divides both countries with high fence running all along the border. Only few of the natives dare to travel across. With recent diamond and oil findings in Molatia their war machine is growing. European and US peacekeeping forces are currently present in Afrene in small numbers, but this might change very soon. Russia and China are in close business ties with Molatia and Afrene is mainly providing services for US and European tourists. War between Molatia and Afrene might be just around the corner...

Isla Duala is a fictional 100km2 African island divided into two countries: Molatia on North and Afrene on South. Border runs along the river and there is a constant tension between both countries. Both countries are backed by different developed world countries that abuse their natural resources: oil and diamonds in Molatia and tourism (natural beauty) in Afrene. Recent discovery of rich oil reserves on Hazena (NW Molatia) ignited the old hatred between countries and Molatia is using fresh income to boost its military. Agressive Molatia is ready to invade weakened Afrene... but US/Europe forces with UN are there to keep the balance and enforce peace.

Permission to re-upload in a bundle?
Sarissa

Weasel119 Mar 17 @ 12:38am
Can confirm the FPS drop (goes from 100 to 8 fps) if you look straight down and turn to certain angles, your location needs to be around the central North airfield on the main island, I had 3 km view distance (Exile). It doesn't happen in the Northern most islands. Not sure how the fps drop happens in the Southern parts of the map. Some users reported that if you lower viewing distance to 1.5 km the bug goes away.

Capt. Maletzki | AVMG.EU Mar 12 @ 2:20pm
Hello IceBreakr. I have no idea if you know about this error, but when you look in North-West direction you experience much FPS drops :(

IceBreakr  [author] Mar 2 @ 5:34pm
Aware of that issue for years, never got around to fix it. Duala needs a new sat anyway.

elpedrochicoraulalfonsotejada Feb 25 @ 8:57pm
The trees have a weird black outline, might want to fix that

Poopshoot Aug 8, 2021 @ 5:29pm
Howdy! I represent an Arma 3 Starsim Unit and we would like to use your map in our Mappack that we are putting together. What would we need to do so that you would allow us to use your map?
< >