Store Page
Hearts of Iron IV>  Workshop > Wolferos's Workshop
This item has been removed from the community because it violates Steam Community & Content Guidelines. It is only visible to you. If you believe your item has been removed by mistake, please contact Steam Support.
This item is incompatible with Hearts of Iron IV. Please see the instructions page for reasons why this item might not work within Hearts of Iron IV.
Current visibility: Hidden
This item will only be visible to you, admins, and anyone marked as a creator.
Current visibility: Friends-only
This item will only be visible in searches to you, your friends, and admins. 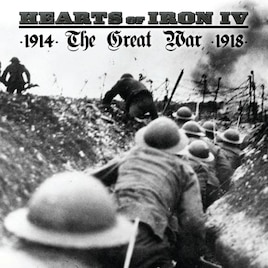 Wolferos
Offline
See all 4423 collections (some may be hidden)

PRESENTATION
One hundred years ago, a war in Europe erupted which would change the world as we know it. Men were forced out of their homes, from their farms and apartments, to fight in seemingly neverending trenches, gaining meters and meters of ground a day at the cost of massive casualties.

Hearts of Iron IV: The Great War, an overhaul mod for Hearts of Iron IV, puts you in the position of one of the countries of the world in World War One's time period. In an era where the stakes were high and risks even higher, you'll have to tread lightly when it comes to diplomacy. A single mistake or a single bluff gone too far could mean the deaths of millions.

Of course, that's not to say that the Great War is the only thing on anyone's minds. Revolution is flaring up in China and Mexico, Italy is rumored to have designs on taking Libya, and the Balkan States seem to be banding closer against one of their foreign targets. With all this conflict across the world, the Great Powers alone won't be having all of the fun.

The War itself has been modeled to match more closely the flow and style of war of World War I. Infantry virtually alone will rule the Battlefield at the beginning of the Conflict, before Planes and Armored Cars will take the field in good numbers. Trench Systems will see construction throughout Europe, until a mad engineer's dream, the Tank, rolls out of the factory and onto the Battlefield. All the while, massive fleets of massive Dreadnoughts will fill the Oceans, with all sides vying to wrest control of the waters.

With elaborate National Focus trees that delve deep into Alternate History, you may find two games with the same country end up completely differently. What if the Zimmermann Telegram had never been sent? What if Italy decided to go hardline and fight with the Central Powers? In this Mod, the smallest divergences can change everything.

The Great War Mod, of course, is designed to attempt to emulate how Paradox themselves would have designed the scenario, so veterans of the World War II scenario and of the Hearts of Iron franchise will have no trouble adjusting. Even the new animations and models are designed with Paradox's standards in mind. You may just settle into the game so quickly, you'll wind up with trench foot and shell shock before you realize it.

New and unique weapons of warfare:

Q: Is this Mod playable in Multiplayer?
A: Yes! It's a great way to spend a saturday night, just make sure you boys don't let carried away and let that stretch to monday morning.

Q: Any recommended country?
A: The German Empire, the Austro-Hungarian Empire and the French Republic are always a good choice to start but you are free to try any country that you want.

Q: This Mod seems cool! Can I help you?
A: Yes! We have a GitHub Repository[github.com] for that.

Q: Will this Mod include Interwar Period and World War II?
A: We've an Interwar Scenario since the Open Beta 0.10 and we already included some WW2 Vanilla National Focuses.

Q: Where can I download the Mod?
A: We strongly recomand to use the Workshop Version but you can download it on Mod DB or NexusMods[www.nexusmods.com].

Mod behaves aggressively and has been reported
1jiricek

The Real Rakesh 11 hours ago
its 1927 and ww1 isnt over yet. everyone just has unlimited manpower

youn.hoffmann 15 hours ago
Hey, tried using the mod for the first time but almost every single edited text is either missing or looks like this: "GER_ww1_political_effort". This example is from the first focus on the new tree. Every single new focus looks like this. Example from the research tree; "infantry_gasmask".
When events pop up, for example the one where King Edwards dies, I got this message (as an event popup) "ww1_england.100.t"
This style of text is everwhere, even on the national spirits. Example: "RUS_ww1_mixed_railways"
Idk if has something to do with my gam,e being too new or smth but tips on how to fix these issues would be great. The mod looks fantastic so far but I honestly can't enjoy playing when I am not even able to get proper event messages or read th
e texts I get .

Lord Likhus #THORCHAIN Jun 24 @ 2:39am
If The Great Depression could be modded in with severe consumer goods requirement it would be great!

rediceman Jun 24 @ 12:12am
can u make the evnt of franz ferdinand's assassination with two choice? survive to attempt or die? tks

mehman6000 Jun 23 @ 7:10pm
i kinda made the ottomans capitulate serbia as the germans and WW1 isn't starting

morgan.venezie Jun 23 @ 5:13pm
If possible, you could add a colonization add on into the mod, idk if its already in the mod lol, im new to it.