Store Page
ARK: Survival Evolved >  Workshop > TheAlchemist's Workshop
This item has been removed from the community because it violates Steam Community & Content Guidelines. It is only visible to you. If you believe your item has been removed by mistake, please contact Steam Support.
This item is incompatible with ARK: Survival Evolved. Please see the instructions page for reasons why this item might not work within ARK: Survival Evolved.
Current visibility: Hidden
This item will only be visible to you, admins, and anyone marked as a creator.
Current visibility: Friends-only
This item will only be visible in searches to you, your friends, and admins. 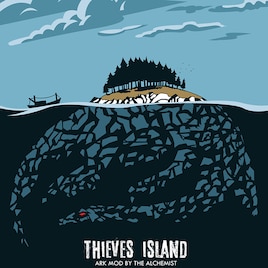 TheAlchemist
Offline
See all 1269 collections (some may be hidden)

This item has been added to your Subscriptions. Some games will require you to relaunch them before the item will be downloaded.
Description
Like the map? Please "RATE" the map for more exposure.

Support the cause so i can continue to build and work for your enjoyment
https://www.patreon.com/thealchemistla

THE ISLAND:
A medium sized but densely packed island. Thieves Island was the home to many a pirate, thief or criminal that made its way to the seas for refuge.

The island they say was found in 1812 by Madame Cheng a notorious pirate who at one point had 1800 ships at her disposal. It was here on “Thieves” island as she called it. that her ships setup base and established a trade route with other thieves.

Over time however, the island's secrets started to show themselves. One by one the ships were “picked off” by the original inhabitants of the island. The dinosaurs and other creatures that have made this island their home, wanted it back.

But Madame Cheng would not relent. The island was in the best location for her to control her growing army of ships. so , she had her 90k crew create tunnels and systems under the island.
Once the underground system was completed, Madame Cheng crew was eaten down to 20k members...most of her ships lay as empty vessels on the ocean sea, awaiting their crews return. But they would never come. For they too...would become food for the gods that lived here.

Legend says...2 bunkers where the remaining crew members laid themselves to rest after the tunnel system was complete are somewhere under the island, and that if found...the treasures there would be beyond the finders imagination.

Before Madame Cheng finally left the island with all her treasures never to return again...she tried one last attempt at riding the island of Dinosaurs or at the very least...ridding herself of them. She paid mages and witches their weight in gold to create islands in the sky to keep her crew safe. They would capture and tame the flying birds of prey in the sky and use them to transport goods and crew from the ships to the sky.

This of course, didn’t work...the pirates became comfortable and starting bringing live cargo onto the floating islands...eventually, those dinosaurs turned on their new masters and killed off the crew..the islands lay uninhabited in the sky until today.

The Suffrage
- This island looks like a crown in the sky. It has pointed rocky mountains along the perimeter and a cave underneath with metal, obsidian and crystal. It's cold up here...bring a coat.

Seils Isla
- Probably the safest place to be on the entire map. Seils has a small tree like looking waterfall on it with a small river that flows off its side edge to the jungle below. Its directly above the ONLY large mountain on the main island.

Hook island
- The sister island to Seils, Hook hangs in the back close to Cunningham's Cave and is home to carnos and a few other nasties. Kill em off and it's a sweet spot for living

Kharon
- - Totally dead island in the sky above the sky bridge (large bridge on the beach made of stone) The island has two waterfalls on each side of the small patch of land in the center of it.


There are 9 KNOWN caves with two large ones under the sea.

THE DETAILS:
The Main Island (Thieves) is roughly half the size of The Island in the main game. Saying that, it has 4 floating islands and an underground system that spans half the island. What it lacks in size it surpasses in depth.
REDWOODS BIOME
BEACH BIOMES
JUNGLE BIOME
GRASSLAND BIOME
MOUNTAIN BIOME
Popular Discussions View All (116)

Kibbles71 Nov 17, 2021 @ 11:27pm
This was a GOOD concept but SADLY has been abandoned. See date for last update.......2019! So much was left WIP that now it's just like knowing what could have been and what it really is NOT. If the developer ever comes back just know that many of us would've played this.

Shayoden Jun 17, 2021 @ 3:47am
I'm experiencing stuttering and freezes of the game on this map, with the consequent obligation to close it. I could only have a quick view of the environment and it looks AMAZING. I hope it will get some fixes to get along with Genesis 2 update.

syko1985 Mar 9, 2021 @ 7:30pm
so tried this map for my pirate server, it didn't hold up to how beautiful the pics made it, and for some reason admin flight mode does cause ALOT of lag, water is see through and not crystal blue like the pics, i don't recommend to anyone, we are changing our servers map once we find a better pirate map