Store Page
Don't Starve >  Workshop > rezecib's Workshop
This item has been removed from the community because it violates Steam Community & Content Guidelines. It is only visible to you. If you believe your item has been removed by mistake, please contact Steam Support.
This item is incompatible with Don't Starve. Please see the instructions page for reasons why this item might not work within Don't Starve.
Current visibility: Hidden
This item will only be visible to you, admins, and anyone marked as a creator.
Current visibility: Friends-only
This item will only be visible in searches to you, your friends, and admins. 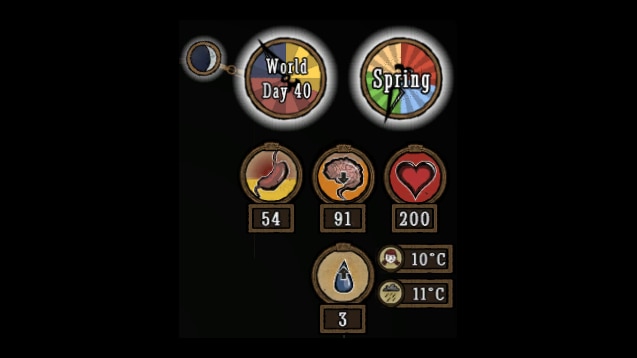 rezecib
Offline
See all 4397 collections (some may be hidden)

This item has been added to your Subscriptions. Some games will require you to relaunch them before the item will be downloaded.
Description
Supports all versions of Don't Starve (Vanilla, Reign of Giants, Shipwrecked, Hamlet, Don't Starve Together). Also available on the Klei Forums[forums.kleientertainment.com].
This mod enhances the HUD to better show the player's stats and various information about the world, such as temperature, season, and moon phase.

Note that unlike Kiopho's Always On Status, I use the game's temperature units directly here, so player temperature can safely vary from 0-70, with freezing/overheating warnings occurring at 5 and 65. (you can change it to C, which works like Kiopho's version, or F if you want)

Credits to Kiopho (Always On Status), Soilworker (Season Clock), and hotmatrixx (Better Moon) for making the original mods. I completely rewrote all of the code to be more compatible, aesthetic, and easily maintained going forward.