Store Page
Space Engineers>  Workshop > Digi's Workshop
This item has been removed from the community because it violates Steam Community & Content Guidelines. It is only visible to you. If you believe your item has been removed by mistake, please contact Steam Support.
This item is incompatible with Space Engineers. Please see the instructions page for reasons why this item might not work within Space Engineers.
Current visibility: Hidden
This item will only be visible to you, admins, and anyone marked as a creator.
Current visibility: Friends-only
This item will only be visible in searches to you, your friends, and admins. 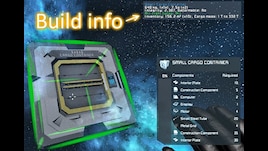 35 items
Description
Displays more information about the block you're holding or aiming at, along with other features listed below.

Highlight features
Rest of the features in short

Soft dependency: Text API
The Text API mod is used for better text representation and placement.
Due to the game's auto-adding of dependencies that mod should be automatically installed.

However, this mod will fall back to HUD notifications if TextAPI is not installed or not working.

Known issues
- Rotating blocks while they're frozen doesn't rotate overlays (game issue: SE-7722).
- Multi-selection block detail info is affected by GUI opacity because it's rendered under, unfixable without KSH adding a way to draw over GUI.

XBox ?
Will not work. This mod relies on client-side scripts which are not allowed on the console itself.
Popular Discussions View All (36)

Digi  [author] Jan 5 @ 4:06am
Each block refreshes whenever it feels like it, some don't ever refresh.
While I can force a refresh, it's disruptive to terminal controls so that's why there's a manual refresh button instead.

As for the refinery, is that from the lack of auto-refresh? is it fine after you click refresh?

If it is a problem I'd like some more details to replicate it, maybe some screenshots, a video or even the world with al other grids removed from it, especially if you have other mods, that would help me see what's going on.

Rayleigh Jones Jan 4 @ 2:23am
Hello, I encountered an issue with the mod. It used to work just fine, but now it seems that the in-terminal build info text doesn't refresh automatically, and the amount of input ore for refineries seems off, I tried to look into the comments for similar issues but I didn't.

I unsubscribed the mod, disabled it in the save, loaded, saved, quitted, re-subscribed and re-enabled it then reloaded the save but it didn't fix the issue. Issue occurs on other saves.

The mod works fine otherwise, and I take the opportunity to congratulate you for it it is a very great one I've been using for months now.

Evil Dec 31, 2021 @ 3:58pm
@Digi https://imgur.com/aOcKcpJ So when i hold out a tool even with drill and welder it clips through just a bit only when its a group selected not one item.

Evil Dec 31, 2021 @ 2:30pm
I found that if you hold out an item and then go into a control panel then go into a group the somethingx item text is behind the item?

Rizzo Dec 26, 2021 @ 10:15am
@Digi, I can't believe I lived without this mod for all my hours! For the toolbar info, would it be possible to add the currently selected jump location (i.e. selected GPS name) to the jump drive "jump" display. When it is on a hotbar item. I usually put all my jumpdrives on hotkeys, but then I have to go into the drive to see where it jumps to when I forget. I don't believe any mod does this yet and would be extremely useful, I would think, for those setting up similarly.
< >