Store Page
Space Engineers >  Workshop > Eddo of Rivia's Workshop
This item has been removed from the community because it violates Steam Community & Content Guidelines. It is only visible to you. If you believe your item has been removed by mistake, please contact Steam Support.
This item is incompatible with Space Engineers. Please see the instructions page for reasons why this item might not work within Space Engineers.
Current visibility: Hidden
This item will only be visible to you, admins, and anyone marked as a creator.
Current visibility: Friends-only
This item will only be visible in searches to you, your friends, and admins. 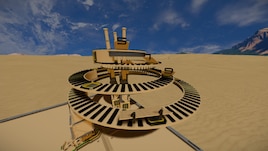 This item has been added to your Subscriptions. Some games will require you to relaunch them before the item will be downloaded.
In 1 collection by Eddo of Rivia
My mods

3 items
Description
A set of of advanced rotors to build turrets and stuff, in line with vanilla style. SG and LG!!!
Survival ready with LOD`s and build stage(s)!

May I present to you my first mod for Space Engineers, as the name suggests i purposfully made these to be used as the azimuth rotor in a turret.
Featuring a complex collision model the rotorhead can be sunk into a roundish hole of armor and can be passed through the complete center section, allowing the gun assembly to move freely through there when elevated.
Just dont try to build too close to the visual model as convex collision shapes like to act a lot bigger then they physically are and you will be blessed with a clang free experience.
Also it got plenty of conveyor connections to supply ammo to any gun you stick on it.

All my blocks can be found in the "Eddo`s Blocks" tab.

Goes well with my other mod More Advanced Rotors !!

Check out all of my mods!

Models and coding was done by me.
Uses vanilla textures.

No reuploading this mod without my permission.
< >
17 Comments

Dragon Fire 813 Nov 24 @ 2:24am
So, I can't get any of the rotors from the 1.3 update to spin, also the sg heads will sometimes shoot off when attaching/detaching. Displacement height also doesn't seem work. This as well as the fact that the head jitters when blocks are placed near by leads me to believe that the collisions are to big.

Federation_Thunderbolt Nov 21 @ 8:44pm
im... really curious if this can work for the Kirishima Cruiser from the Yamato 2199/2202 anime, where the Bridge and Turret were together

Titan Nya Sep 9 @ 1:23pm
Well... Clang is angry using this mod... I 1rst thought it was a collision issue with voxel so I've tried to build it 1 block high and still angry Clang... So gonna make a change of plan and not use them for now... Maybe I'll try the Large to Small variant later but well... Hopefully Clang will be calmer in the futur xD

Omega Aug 12 @ 2:20pm
okay those do not work properly . i place them. build them up . so far so good but after i place something on them the extrem wobble around and destroy what is place on it. if i place a second block the first one will be destroyed

Eddo of Rivia  [author] Aug 8 @ 1:37pm
@arcticequine The rings are actually 5x5, 7x7... blocks, hollow blocks are not possible in SE which mean you cannot build inside the ring and you cannot build below because the mount points are only ot the top side.
A possible sollution would be to attach an additional grid via rotor /hinge /whatever you preffer and have it extrude down through the ring.
I was at some point also thinking about this problem and maybe I´m doing a version that lets you build on top and below the ring.

arcticequine Aug 7 @ 4:13pm
It looks as though this doesn't allow me to build on the rotor's grid past the stator in terms of height (I'm trying to make a turret basket, but can't build down below the ring on the ring's grid.) Is something that's not possible in the game's engine?