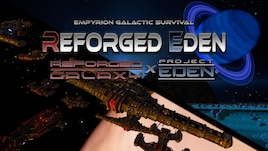 Vermillion
Offline
See all 117 collections (some may be hidden)

Reforged Eden is a combination of Vermillion's game overhaul Reforged Galaxy and ravien_ff's exploration focused Project Eden scenarios. Click on the workshop link for each scenario above for more detailed information about what each one adds.
Nearly every block, weapon, POI, planet, trader, and mission has been updated or replaced and a large amount of new content added. This greatly changes the game experience.
The scenario is still under active development so this information is subject to change. Please see the update notes for the latest information.

Features:
The below list is just some of what is included in the scenario. It would be impossible to list everything here.

The CPU, power, mass, and volume of nearly every block and item has been rebalanced. CPU tiers no longer exist. Most non-functional blocks no longer cost CPU.
Each individual CPU extender increases your maximum CPU. You can have a full set of 1 Basic, 2 Improved, and 5 Advanced extenders at the same time. Crew adds a small bonus amount.
You can expand your CPU limit even further with difficult to obtain Quantum Extenders or Auxiliary Cores.
Building multiple ships specialized for a specific task or role that fit within your available CPU is now more important.

Player progression has been rebalanced and overall slowed down. Start off mining slowly with a hand drill and progress all the way up to automatic drill turrets and industrial mining rigs to semi-automate your resource income.
Building dedicated mining vessels or trading for resources is now useful.
New POIs and patrol vessels have been added from easy to ultra++ in difficulty.
Abandoned wrecks are now more rewarding.
More options for upgrading your power has been added with the new class system, warp drive range increases, a food and medical overhaul, heavy ships weapons, and rare devices and weapons.

The strength and energy costs of thrusters have been rebalanced. Larger thrusters are now more efficient.
Solar panel limit increased to 24 and advanced solar panels added. CVs now have access to solar power allowing them to be passively powered while in standby mode.

Shield generator tier now affects how resistant your shield is to some kinds of incoming fire.
Multiple tiers of shield capacitors and rechargers added. Capacitors increase maximum shield while reducing charge rate while rechargers increase charge rate at the expense of max shield making balance important.
It is now possible to build battleships with truly powerful shields, but be warned as some enemies may have exceptional bonuses against shields.

Dozens of new planet and moon types have been added and solar system generation has been completely revamped.
Space playfields have received a complete overhaul with many new types of orbits, sectors, and environmental decorations such as gas clouds and ambient audio.
New asteroid fields, space stations, and combat, mining, and exploration sites can be found in star systems.

The galaxy has been completely overhauled with over 20,000 star systems and new major and minor regions and nebula to explore. Regions and territory can affect what content you find there.
Star class now affects what planets and sector types can be in a system and dozens of new star visual variations have been added for variety. Some can be binary or trinary systems.

Existing traders have been completely rebalanced and new traders added.
Many traders now offer randomized missions.
Many new trade goods are now available to buy or sell.
Trading stations have been given decorative advertisements and docking lights.

Many new blocks, devices, weapons, items, medical consumables, food, and others have been added.
A sound overhaul was done on weapons to give each a more appropriate firing sound.
Weapon effects, explosions, and shield impacts have been revamped with new custom visuals.
New device types have been added such as lifts, automated mining turrets, buttons, fusion reactors, and more.
Some existing devices have been given new models thanks to Vertex Rage Studio.

The configuration of NPCs has been revamped. Many are smarter and faster, but with less health.
Over 2000 new or updated POIs and patrol vessels.
NPC factions have been given new weapons, shields, NPC types, and capabilities.
New hacking systems have been added.

Disclaimer:
This workshop upload contains materials copyrighted or licensed for use by by ravien_ff and Vermillion. This item is not authorized for posting on Steam or elsewhere, except under the Steam accounts named ravien_ff or Vermillion.
Permission is required to upload a modified version of this workshop item or use the copyrighted materials within (Unity asset bundles, images, video, audio, etc).
Game configuration files such as .yaml, .ecf, or .epb are free to use without permission, but a link back for credit is greatly appreciated.