Store Page
ARK: Survival Evolved>  Workshop > gamegods2021's Workshop
This item has been removed from the community because it violates Steam Community & Content Guidelines. It is only visible to you. If you believe your item has been removed by mistake, please contact Steam Support.
This item is incompatible with ARK: Survival Evolved. Please see the instructions page for reasons why this item might not work within ARK: Survival Evolved.
Current visibility: Hidden
This item will only be visible to you, admins, and anyone marked as a creator.
Current visibility: Friends-only
This item will only be visible in searches to you, your friends, and admins. 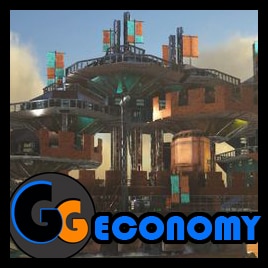 gamegods2021
Offline
See all 68 collections (some may be hidden)
You need DLC to use this item.

This item has been added to your Subscriptions. Some games will require you to relaunch them before the item will be downloaded.
Description
MOD ID: 2401740415

****This Mod will no longer be updated, GG Economy Version 2 is out to replace it****

Patches: For some people my patches don\'t auto-update for players. Some bug with Steam or the Dev Kit. If you crash when you open the Buying Station then close ARK and un-sub and re-sub to my mod. The same glitch might let a player join a server that\'s running a more updated version of my mod, apply the same fix.

This Mod can be used to Replace StructuresPlus, SuperStructures, and Arkonomy. Feel free to tell me what you like and dislike so I can always improve it!

PvP Balanced: True that the Mod adds a few things that\'s better than their Vanilla Counterpart, however it\'s not meant to outshine Vanilla Gameplay completely. Tokens aren\'t meant to be Obtained Rapidly, how you Spend Them is Strategic. Server\'s with OP Settings can increase the rate that Tokens are gathered.

Streamlines S+: S+ is great and many unofficial servers run with it as a Must Have Mod. PvP Server Owners create Engram Lag when trying to remove OP Items from S+ and Since WildCard implemented the new Structure Load System servers that run S+ or another S+ Type Mod suffer in performance. The new load system only helps for Vanilla Structures leaving Modded ones to load one-at-a-time. This creates lag each time players join a server, server hop, stumble upon a massive base, or World Saves. This Mod Streamlines S+ in these ways:
1. S+ Items can now all be built in specific crafting stations freeing up the Engram List, Only 5 Engrams used for this mod!
2. S+ Items cost Tokens with some items to have combinations with the Vanilla Items (ex. Tek Transmitter) or Element. This allows people to still use it but they might not load the server down with massive S+ Builds unless they\'re super-effective Token Earner\'s. Players choose, Do I put Tokens into my Base or New Gear and Items.
3. S+ BP Maker is now a Tek Engram with a new Crafting Cost. Server Owner\'s still have a choice to Block this Engram or Allow Players that work themselves up the Tek Ladder to Use it.
4. S+ Mutuator can no longer Corrupt Tek Rex\'s or Tek Trikes into Enraged Corrupted Dino\'s that obliterate bases. The Corruption Pulse is now The Ghost Pulse which allows you to swap a Dino to a Ghost Variant from my mod. The Engram still remains so Server Owners can block it if desired.

***Current Bug with Carts, they seem to only work correctly in Single Player for now***

This Mod uses Open Sourced Material from the following Mods and Creators, thank you for paving the way for me to grow and learn how to use the Dev Kit: Orionsun - S+, prome - ARK Bionic, SamKO - Primitive Survival Equipment, Nemesis - Accessories Plus
Popular Discussions View All (8)

Ragingarcher  [author] Sep 29 @ 3:30am
I'm currently working on the version that has S+ removed, GGEconomyV2. I'm doing it in a way were you won't loose what you've built if you add S+ to the server and a way to convert things tamed in Version 1 of the Mod to transfer to Version 2 of the mod. GG Additions will still work with Version 2!

gwSenpai007 Sep 19 @ 8:20pm
is there any way to disable the creatures taming? I would love to be able to kill for the tokens, since im thinking of using this with the hunted, could be very useful

Ksirox Aug 30 @ 3:11am
is there any way to remove the folders in gg shop?
i hate looking for specific item in it

ELITEGAMEING Aug 15 @ 10:15am
I dont use this mod with s+ it works fine with put in fact if are useing s+ ur putting twice the stress on ur sever runing this and s+ lol

Mike EL Hunto Aug 15 @ 8:35am
So i have the S+ hatchery as well internal cable and what have you crafted but they are unplaceable is there a load order or do i remove s+?

LilNawtyLucia Aug 7 @ 12:04am
@Tox, @ctmtank420, I just tried it on my SP save. All that happened was my S+ stuff was now named GG. I did have both installed for a bit tho, and just removed S+ later. I dunno if GG has all the same structures but I didnt have anything missing. Just make a back up save.