Store Page
Arma 3 >  Workshop > TheTimidShade's Workshop
This item has been removed from the community because it violates Steam Community & Content Guidelines. It is only visible to you. If you believe your item has been removed by mistake, please contact Steam Support.
This item is incompatible with Arma 3. Please see the instructions page for reasons why this item might not work within Arma 3.
Current visibility: Hidden
This item will only be visible to you, admins, and anyone marked as a creator.
Current visibility: Friends-only
This item will only be visible in searches to you, your friends, and admins. 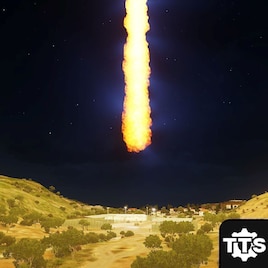 This item has been added to your Subscriptions. Some games will require you to relaunch them before the item will be downloaded.
In 1 collection by TheTimidShade
TTS Effects

5 items
Description
Overview:
This is a beam laser effect I created for one of my missions. The beam particle effect is based on ALIAS's gravity script which you should check out if you like the look of this script. When activated, a beam laser will come from the sky above the target position and obliterate most objects beneath it. The damage/destruction can be disabled if you just want to use the effect.

This is the mod version, a script version[github.com] is also available if you want to reduce dependencies or hide it from your players in your mission file.

If you'd like to test the script for yourself, you can try out the demo mission.

The script and how to use it is described in more detail on the GitHub page.

For help with troubleshooting, questions or feedback, join my Discord[discord.gg]


Notes:
The explosion effect has a fairly high particle count, try to avoid triggering more than one beam at any given time for best player performance.

The editor placed module can be synced to triggers so that you can use the script without writing any code.


License:
This mod is licensed under Arma Public License No Derivatives (APL-ND)[www.bohemia.net]
You may not re-upload my mod in a 'mod pack' or 'aux mod' or use any parts of the script in another mod without my permission. If you are using the script version, you may freely use the script in your missions, private or uploaded to the Steam Workshop without my permission but if you put it on the workshop I would appreciate it if you credited me :)

Supported Languages:
If you'd like to translate the mod into a different language, contact me via my Discord or create a pull request on GitHub.


Copyright 2021 TheTimidShade. This item is not authorised for posting on Steam, except under the Steam account named 'TheTimidShade'.
< >
44 Comments

TheTimidShade  [author] Apr 7 @ 5:37pm
@Zdraste I do not allow reuploads/repacks of the mod at this time. If you want to use the mod add it to a Steam collection.

Zdraste Apr 7 @ 6:59am
Good day, I would really like to reload your mod in my mod. The mod will not claim the rights of the creators of the original addons and is only used to save space in the presets on the project Star Line . Is it possible to get this permission, of course, with a mention of you in the description of the mod.

TheTimidShade  [author] Nov 2, 2021 @ 8:52pm
@Niven Not currently no, but if you use the script version you could change the lifetime of the particles so that they stay for longer. You would need to edit the file 'functions\fn_rayParticles.sqf' and modify the particle parameters.