Store Page
Crusader Kings III >  Workshop > cybrxkhan's Workshop
This item has been removed from the community because it violates Steam Community & Content Guidelines. It is only visible to you. If you believe your item has been removed by mistake, please contact Steam Support.
This item is incompatible with Crusader Kings III. Please see the instructions page for reasons why this item might not work within Crusader Kings III.
Current visibility: Hidden
This item will only be visible to you, admins, and anyone marked as a creator.
Current visibility: Friends-only
This item will only be visible in searches to you, your friends, and admins.

This item has been added to your Subscriptions. Some games will require you to relaunch them before the item will be downloaded.
In 2 collections by cybrxkhan
Cybrxkhan's Library (for Patch 1.8.X)

RICE, or Regional Immersion and Cultural Enrichment, is a mod that adds immersion to different regions, cultures, and religions in CK3. As a spiritual successor to my Immersion Packs for CK2, it is a collection of "flavor packs" similar to PI's official flavor pack DLCs. RICE's guiding philosophy is to keep a focused scope that won't change gameplay significantly, but instead adds flavor across the world that is grounded in historical authenticity, especially for lesser-known places and peoples.

RICE IS IRONMAN COMPATIBLE BUT *NOT* ACHIEVEMENT COMPATIBLE. It works on existing saves, but some features won't appear unless it's a new game. (Also make a backup copy of your save just in case.)

Feel free to use my work in your mods - all I ask is that I am credited and (if possible) to give me a heads up. If you liked the mod, feel free to favorite and rate it up!

RICE is designed with compatibility in mind, and runs fine with most mods - for more info for various mods, please see this webpage[cybrxkhansmods.godaddysites.com]. I avoid editing vanilla files to prevent conflicts with other mods. For example, new cultures are added via hidden events at game start instead of directly through history code. Compatches are available for:


Special content is also provided if you play with The Fallen Eagle.

I WILL NOT maintain compatches for most mods that may need one. Feel free to make your own (let me know so I can link it here). If you're a modder, don't hesitate to contact me on the forums or Discord about compatibility!

Each RICE flavor pack adds features to a region, culture, or religion, that range from new decisions to new buildings, dynasty legacies, and more, as well as flavor events and music. Please see the Flavor Pack Guides[cybrxkhansmods.godaddysites.com] for more info on new features, tips and tricks, and selected lists of academic sources I used for further reading.

There are currently 25 new flavor packs, as shown on this map: 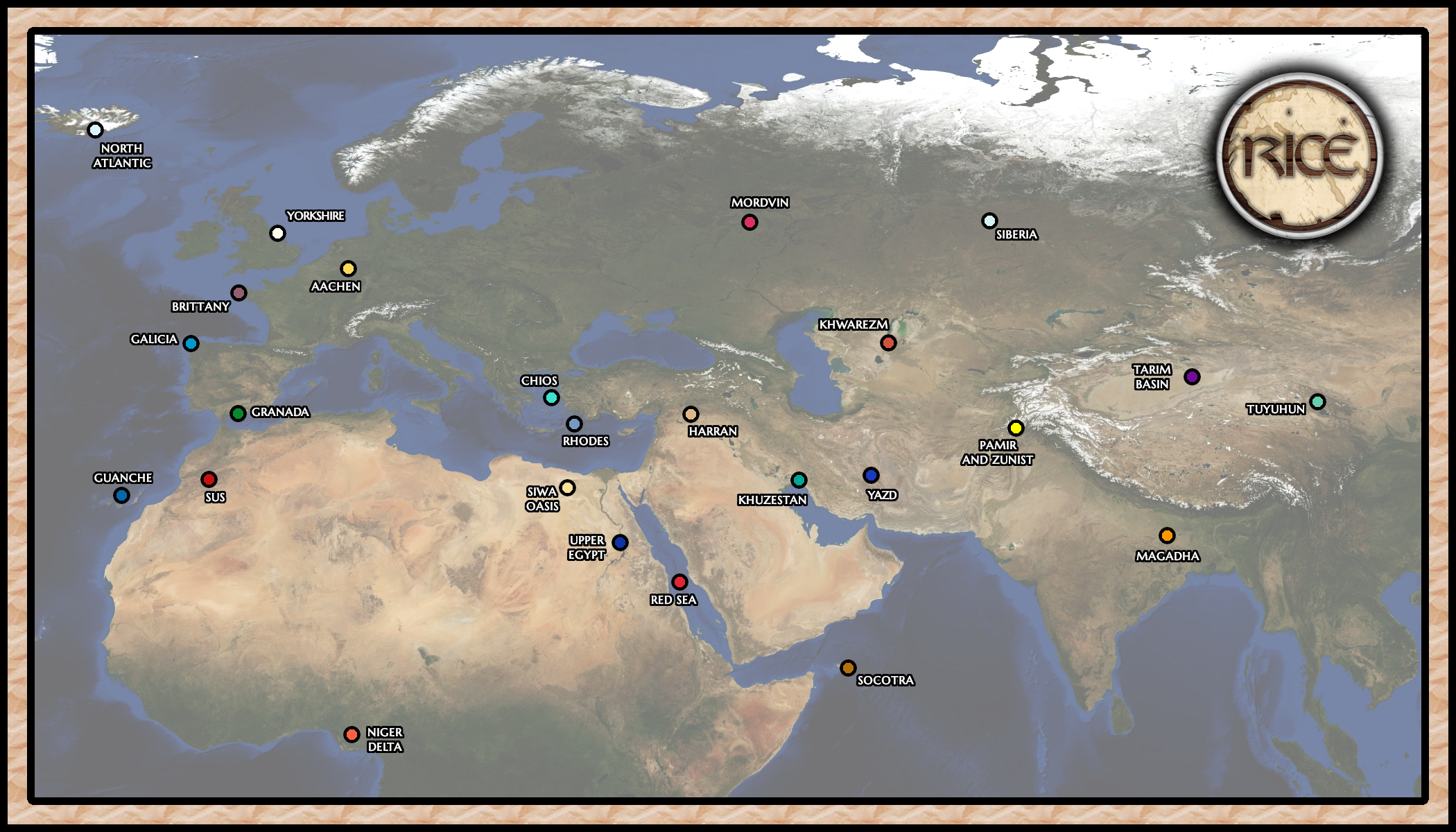 RICE uses the normal English text as a placeholder so you won't see gibberish for other languages, except Chinese and Korean, which have submods.

Version 1.8.4 "Al-Biruni"
"For what the crowd calls courage - bravely dashing into the fight or plunging into an abyss of destruction - is only a species of courage, whilst the genus, far above all species, is to scorn death, whether by word or deed."

Thanks to all I worked with, took stuff from, and provided me encouragement and feedback over the years. Huge thanks also to the translators who put up with my erratic update schedule.

Special thanks in particular to:

cybrxkhan  [author] 8 hours ago
@Default Player #162: I was originally planning to but I realized I just don't have the time and motivation to do it. To my understanding they're sort of compatible but the balance will be very off. Anyways, anyone is free to make a compatch if they want.

Default Player #162 12 hours ago
Will you make a patch for sinews of war?

cybrxkhan  [author] 19 hours ago
@Born in Sin: Thank you!

Born in Sin Jan 29 @ 4:18am
Just finished my first game with the newish North Atlantic content. Very cool, Greenland is a really creative and well-done use of the Struggle system. RICE really tackles CK3's main problem, that being the lack of regional flavor, and the mod has revived the game for me. Thanks for all the fantastic work!

cybrxkhan  [author] Jan 28 @ 12:26pm
@MeanDean Yeah, I usually go for more obscure stuff - still, I think focusing on the lesser known history or less known aspects of well known areas fits the RICE brand too, kind of like how the North Atlantic flavor pack focused on an important but less known aspects of Norse history. Right now the lion's share of content will be for the 867 bookmark (as I want to focus on the period in between Rollo and William), but some of the flavor will still apply generally for both starts - for example completing the Norman Conquest will give you access to a Domesday Book decision, regardless of when you did it. Of course if I have time I may add in other stuff too for 1066 specifically.

MeanDean Jan 28 @ 10:19am
Awesome! Wow actually a pretty popular pick which seems off brand but very exciting for such a crucial area. I wonder what this will change about the 1066 start there

cybrxkhan  [author] Jan 28 @ 9:05am
I'm happy to reveal the trailer for Normandy: Adventurers and Aristocrats, RICE's 26th flavor pack! The update focuses especially on the the lesser-known history of Normandy between Rollo’s arrival and William I's conquests, including a new mini-struggle.

ETA will be later in February; previews and a dev diary will be posted on discord, twitter, and Reddit from now until then.

cybrxkhan  [author] Jan 28 @ 9:05am
@Lady of Gore Possibly in the future, yes, though might not be able to until the devs revamp how the faith code works. as adding in new faiths to existing religions is not possible without compatibility issues at this time.

Lady of Gore Jan 28 @ 7:24am
Is it possible you can also integrate the religions from baltic-finnic overhaul just like you did with ukonusko overhaul, since that mod has been abandoned, and probably doesn't work on newer versions.

cybrxkhan  [author] Jan 27 @ 1:04pm
For anyone who hasn't seen them yet, I've been posting some teasers for the next flavor pack for RICE on discord and twitter; here are all four: